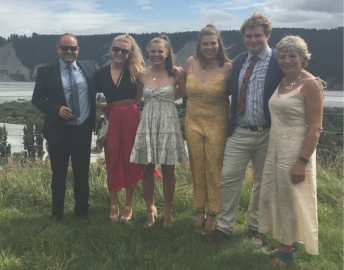 This year’s Malvern A & P Show President Richard Hill has a long rural history in the area. He and wife, Anna have lived in the Malvern district for the last thirty years.

“My first job in Selwyn was manager at Dry Acheron and following that I was self employed as a fencing contractor and livestock scanner,” Richard explained. “We moved around the district living in Glentunnel, Greendale and Sheffield until 1997 when we leased a farm at Homebush. We continued our scanning business as well as farming and lived there for eight years,” he added. “Then we took on the lease of Flock Hill, moving here in 2005 and remaining there to this day.

“We have four children; Georgie – a teacher at Sheffield Primary School; Sarah – in the Farmlands marketing team; Charlotte – at Lincoln University, and Jack who finished school last year and who is currently casual farm working in the Rakaia Gorge and Geraldine,” Richard said.

Richard has been involved with the Malvern A & P Show for the last fifteen years starting as convenor in the poultry section. “This was a section which I thoroughly enjoyed, I met some great people in an area I had never really had anything much to do with. I then moved to the hunter rounds about ten years ago and also became involved in the entertainment segment of the event,” he said.

“I firmly believe rural shows are a great way for communities to get together. It always amazes me the effort that so many people voluntarily put in to their neighbourhood so that the Show can go on.

“There is an enormous amount of work that has to be done before an event like this, with each section being responsible for their own preparation. We do have monthly meetings to discuss and monitor progress though. The week leading up to the event there are two main working bees, but really the whole week is taken up with Show preparation. Secretary/Treasurer Rebecca Stewart has been extremely busy with the schedule, processing entries and social media promotions – all necessary for a successful Show. While there is someone in  charge of each section it is the job of Show president and vice president to make sure each section has what they need and are supported to get the job done.

“My role as president is really to enjoy the day meeting and greeting as the Show figurehead while ensuring judges, committee members and other dignitaries are appreciated, acknowledged and feel welcome,” Richard stressed.

“There has been a push this year to get more young people involved with fresh ideas, which has meant, new entertainment, the Brick horse jump, drone racing, army interactive display, DOC display of what is in the area, and the ringside marquee for judges and past presidents. A major feature this year will be a display by the thirty piece New Zealand army band, along with some great exhibits and a high standard of Show entries. As it is the 120th Show we have two supreme awards, one produce and one livestock. These will be presented by Selwyn MP Amy Adams and Tim Black, NZ Agricultural Show President.”