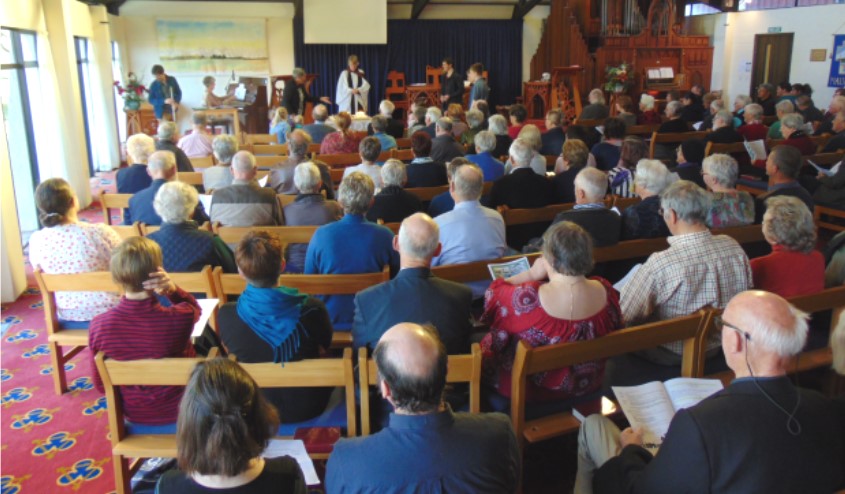 On Sunday, September 29th, Trinity Church Darfield celebrated the fortieth anniversary of the opening of their church building.  Both congregations who worship there on Sunday mornings have been in Darfield since the late 1800’s, but in the 1970’s they made the decision to take down their one hundred plus years-old wooden church buildings and together build a church that could be used by the Methodist, Anglican and Presbyterian congregations. The project was begun by The Rev Hugh Paterson in 1970, and it took nine years of planning and building until Trinity Church was opened in 1979. The congregations have been working and ministering together since that time.  It was the first ‘Joint Use Church’ in New Zealand where local denominations pooled their resources to do ministry together.

“What is ministry?” asked Rev Susan Baldwin. “Ministry is what Christians do to express their faith. That means caring for creation, responding to the needs of others, speaking out against injustice, challenging violence, and pursuing peace and reconciliation.”

135 people from across the Malvern district (including two visitors from South Africa and China) attended the Sunday morning service. Speakers at the service recounted the story of how the project progressed until the opening of the doors in November 1979. The Rev Hugh Paterson, Evan Frew, Graham Taege, Reverend Lionel Brown, Christine Anderson, Adele Langlands and Archdeacon Susan Baldwin described the four decades of the church’s ministry and work in the community.

“Along with Lynmaree Sopoaga, we thank all the helpers who blessed the local businesses along the main street, and in the Trinity car park after school,  by delivering Trinity’s Happy Birthday cake last Tuesday,” Susan added.

“We wish to also thank the anonymous sponsor and her family for providing a generous and sumptuous celebratory morning tea, along with our musicians, Elizabeth Blackburn and Peter VanSiclen who played the music during the service,” Susan concluded.