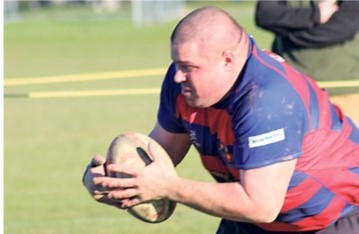 Darfield Div 1 travelled to Springston on Saturday for the big Semi Final clash and with 24 hours of rain and a curtain raiser played on the ground beforehand, we were greeted with very muddy and wet conditions. Springston came out hot, scoring a try within the first five minutes thanks to a fortuitous bounce from a chip kick that somehow bounced up perfectly in the conditions.

Darfield quickly replied with a Sean Carston penalty goal that just snuck over, after slipping over during the process. The next thirty minutes belonged to Springston. They played perfect wet-weather rugby, with good tactical kicking from their ten, followed up with solid forward-dominated rugby, scoring two further tries and taking the lead out to 21-3, moments before halftime. But Darfield finally managed to hold on to the ball before half time after a number of attacks resulted in drop balls. Scott McIlroy scoring in the corner and converted from the side line much to the delight of a strong Darfield crowd on the far touchline. Darfield returned after half time to a real arm wrestle with Springston; mostly down to the conditions with neither team really getting anything going until McIlroy dotted down in the 58th minute to bring Darfield within striking distance at 21-15 down, with twenty to play. The last twenty minutes were a real tense affair with resolute defence from Springston and a number of attacking raids coming from Darfield which came close, but no cigar. With time nearly up on the clock, a botched clearance by the Springston 9/10 combo meant Darfield had one last chance of an attacking line-out, inside the 22. After a number of phases, and deep into injury time, Darfield worked close to the posts and McIlroy was able to crash over and burgle his third try to score an outstanding hat-trick in a semi final. That left the score at 21-22 with the kick to come. Up stepped young Sean Carston to slot the conversion straight through the middle to send Darfield to their third straight final!

The final will take place on Saturday, July 27th at Prebbleton versus Southbridge.