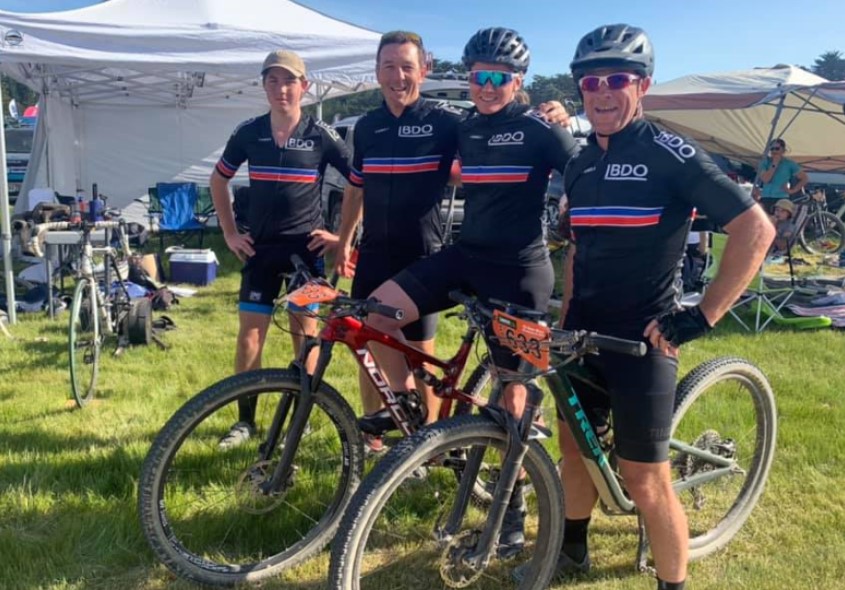 The fourteenth running of the Hunter Civil ten and six hour mountain bike races were held on November 2nd at McLean’s Forest Park. While the day started out calm and cool it finished with 30 degree temperatures!

The event was attended by around 1,500 mountain bikers who raced against the clock to see how many eleven kilometre laps of the course they could complete. The event was suitable for all levels of rider and took place on a purpose built track. This featured a free flowing single track with bermed corners which made for some great riding, it was reported. The track followed the natural terrain of the area, winding through the forest and went up, over and along stop banks.  4WD tracks were also used in places which allowed for passing bays.

The Rural Building tent was set up to provide shade for local riders Simon Earl, Nigel Hodges, Jonty Hodges and Jemima Snook as they took on the ten hour race as a team, winning the open mixed team section by an amazing twenty nine minutes.

Jonty, Nigel and Simon all completed seven laps with Jemima completing five laps before she had to leave as she had exams the following day. The team completed twenty six laps with an average lap time of  22 minutes 20 seconds.

“Simon got the team off to a great start which isn’t easy when battling with hundreds of other riders all trying to get through a farm gate,” explained Nigel.

“Jonty has a massive engine for a fifteen year old completing laps between 22 – 23 minutes,” commented Simon. “Jemima was also an extremely strong rider,” Simon added. “Nigel showed wicked technical skills to consistently pump out the fastest laps,” he said. “I hit a tree in my second lap, played pinball at 28km/hr going too hot, missed apex and smack. A little challenging getting back on the bike each time but it never got any worse…. I was surprised to later find out I had cracked my scapula,” Simon explained. “It was a great day out and an awesome win,” he concluded.

Also based at the Rural Building tent was another local Steve Roberts and his important support crew of Charlotte and Anna. Steve competed in the six hour solo coming a very close second in his category.

Across the track from the Rural Building set up was another well known local name Ethan Rose and his team who had great rides on the day winning the open men’s and were also the overall winning team.

Well done to all those who competed in the event.