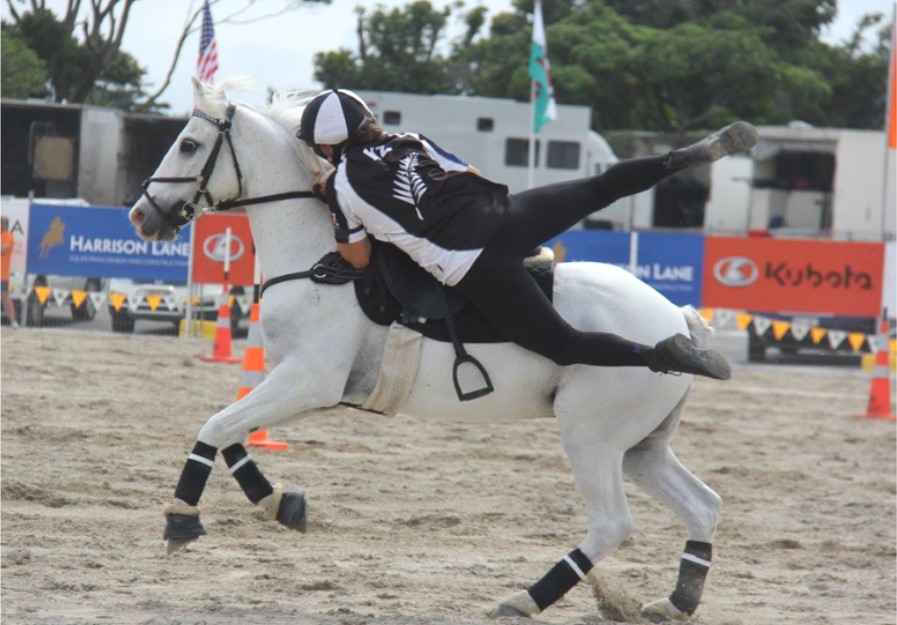 Two Canterbury riders have recently been named in the New Zealand team for the mounted games Nations Team Championship. Leah Zydenbos, of West Melton, and Max Shanks, of Christchurch, will don the silver fern in October for the Nations Team Championship hosted by Canterbury Mounted Games Association (CMGA). Nations 2019 is the first international mounted games tournament to be held in the South Island. (The equestrian sport of Mounted Games is where very fast competitions  are played by people of all ages, on ponies up to a height of 152cm. They require a high degree of athletic ability, good riding skills and hand-to-eye co-ordination.)

At just seventeen Leah is already well versed in the pressure of international competition. In 2017 she was New Zealand’s top under seventeen individual rider and a world beater as part of the New Zealand team who won the Under 17 World Team Champs. Now in her first year at University of Canterbury, Leah has had great success in a variety of equestrian disciplines, but it is the mounted games that remain her number one sporting passion.

“I love the strategy of playing to the strengths of each team member and pushing through the adrenaline-charged atmosphere to support our ponies, and each other, during the pressure of competition. It’s obviously very physical, but it’s just as much a mental challenge,” Leah explained.

Leah is also a highly valued mounted games coach. Canterbury MGA riders in under 12, under 14 and the veteran’s division (over 35) have taken national titles with Leah as their coach.

Having represented New Zealand as part of the six-rider team competing at Nations 2018 in Kentucky USA, Max Shanks, aged seventeen from Christchurch, is also no stranger to international competition. In the US travelling teams rode loan ponies supplied by the host nation. “We had just two days to work with our assigned loan pony before the Championship. This year as host nation we have the advantage of riding our own ponies and I feel like I can bring my ‘A’ game on my super games pony ‘Annie’, commented Max.

Max also coaches riders throughout Canterbury, Nelson and Murchison in this increasingly popular equestrian sport. In March Max coached a Canterbury under 14 pair to runner up position at this year’s Horse of the Year in Hastings.

USA and South Africa have also selected teams for Nations 2019. Australia and Canada are expected to name their teams shortly. Nations Championship heats will be held at Trent’s Vineyard, Prebbleton on October 10th – 11th, with a thrilling final at Ellesmere A & P Show, Leeston on Saturday October 12th. Finals day is sure to bring A and P crowds to a standstill as this exciting sport show cases the world’s fastest mounted games riders.

Canterbury Mounted Games Association are currently seeking sponsors who will be given naming rights to each race on finals’ day.