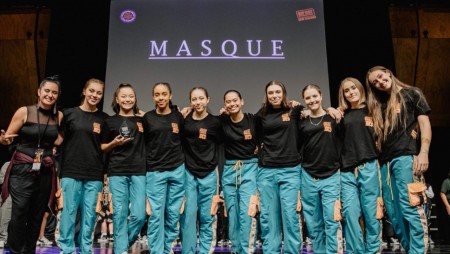 Dancing on the World Stage

Sixteen year old Soph Kingi from Darfield has been dancing since she was four years old. Initially starting locally with Leisa Ropiha, before dance instructor Tara Marshall taught the keen young student her first Hip Hop and Jump Jam success at school followed. Described as having a natural talent for dance and a sassy attitude – it’s been a winning combination for Soph.

For three years from 2015 until 2017 Soph danced at Swarm Studios competing at both Regional and National levels. Moving to Zion Studios in 2018 her crew Aperture won the Hip Hop Unite (HHU) New Zealand Nationals competition and qualified for the HHU World Championships in Amsterdam (the Studio did however choose not to travel and compete at this competition).

“Soph’s biggest goal has always been to compete at the Hip Hop International (HHI) World Championships in America; every Hip Hop Dancers dream,” explained Soph’s mother Leanne. “Last year a family decision was made for Soph to chase her dream.”

In November last year Soph successfully auditioned for the top New Zealand dance studio, Identity Dance Company (IDCO) based in Auckland. This involves constant travel to Auckland for training and competitions and requires massive amounts of hard work, dedication and focus, not only for her dance, but also for her education. Fortunately her school supports her bid to realise her dream and assists wherever possible to keep her up to the mark with her studies.

Soph is a member of the all female Varsity (13-18 year olds) crew, Masque, and the Mega Crew (Open age grade) Yung ID, which has 45 female and male dancers. Soph is excited that four dance mates, that she competed with in 2017, are competing in Phoenix as well. Three with Swarm Studios and one with the Royal Family

After dancing in the Hip Hop International NZ Regional competitions, held around New Zealand, Soph qualified for the National Competition, which was held in Auckland between April 15th and 18th. From these Nationals three crews qualify from each division to compete at the World Championships. This year 106 crews performed over the four days of Nationals, in six divisions, with fierce competition throughout.

Soph is extremely grateful and proud to be part of the IDCO family. They have five amazing crews, three of which will be representing New Zealand at the Worlds in Phoenix, Arizona in August.

“We are extremely lucky to be led by three amazing choreographers and this has been a dream come true for me, as I have always idolised them and their talents,” Soph explained. Soph’s experience of competing at the very top level while rewarding, has reinforced to her that there is no substitute for dedication and hard work; there are no shortcuts.

The IDCO qualifying crews now become part of Team New Zealand who will travel and stay together as a group, while representing their country on the world stage.

“I am extremely grateful for the support of my parents Andrew and Leanne in helping me to realise my dream and for the backing of my School, St Margaret’s. I also thank Steve and Michelle Lassche for the garden party at Knockdolian held recently,” Soph ended.

Fundraising is underway for the trip to America and the family sincerely thank those who have already supported Soph; watch this space for details of an entertaining and fun Karaoke to be held in Darfield soon.