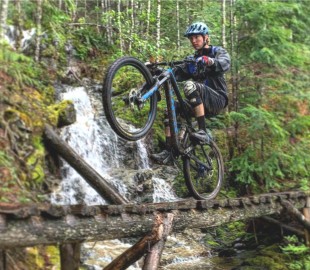 Experience of a Lifetime

Local business Curle Contracting is understandably rather proud of one of their staff members. Twenty one year old Regan Cornelissen is currently on leave from his local employment until the end of May doing something he’s extremely good at. When in New Zealand, Regan lives at Charing Cross and attended Darfield High School after doing his primary years at Greendale Primary School.

Regan has always been around machines and riding bikes from a young age and so the natural progression was to design and build tracks and jumps. So good he became at doing just that, that he was approached to go and do it in Canada – which is where he currently is.

“I was taught how to operate a digger at primary school,” Regan commented. “Then pretty much everything else from there was self taught, with my skills further honed by working at Curle Contracting. I also built my own BMX track in the backyard with a digger.”

Having a home practice base was possibly the advantage that led to Regan representing New Zealand at the BMX world championships in both Australia and New Zealand. Regan also worked on building mountain bike tracks at the Christchurch Adventure Park utilising a wide range of digger sizes.

“This definitely boosted my operating skills massively; being out on the side of a hill, in some very dangerous spots that a regular digger operator wouldn’t even consider putting themselves in,” Regan smiled. “I was also behind the controls of a digger, building the Nut Buster Hard Enduro Prologue Endurocross motorbike event at the Christchurch A & P Show last November, alongside Mitchell Macdonald,” he added. Then again in the digger re-building the Michael Godfrey Memorial Motocross Race Track for this year’s race in early June, alongside Mitchell again, volunteering our time for         the Christchurch Off-Road Motorcycle Club.

This was all before Regan hopped on the plane bound for Canada to design and build dirt jump parks in Kelowna and Squamish BC with the help of Angus Macdonald, for Dream Wizards.

“I’m having the most amazing experience,” Regan finished.