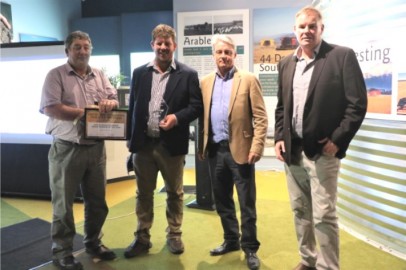 Local family partnership, Earl Worsfold and his parents Syd and Trish have come out on top at the United Wheat Growers’ competition recently, winning this year’s top award, plus the Feed Wheat section. This competition is a highlight on the arable farming calendar as it creates the perfect opportunity for the best arable farmers to showcase their best cropping efforts.

Sixth generation farmer Earl, has grown up on the 400ha family arable and livestock farm in Greendale. He farms alongside his parents, while also leasing a neighbouring 260ha farm on his own account. The Worsfolds usually sow around 200ha a year in wheat, with Earl’s focus being more on feed grains.

This year Earl, his family and other arable farmers’ crops experienced an exceptionally wet spring and slow growing season. “Our cereal crops did very well in these conditions although the peas and some other crops not so much,” Earl commented. “Although under a lot of disease pressure we managed to get our input timings just right. I think a bit of luck probably came our way in that respect,” he added. “We’re also extremely appreciative of the expertise of our PGG Wrightson, Darfield, agronomist, Alice Keir. We enjoyed great harvest weather which helped with the quality of the crop,” he said. The partnership’s winning crop was the Graham hybrid seed which produced thirteen tonne a hectare and Earl said it has more than proven its worth. “We just look at the FAR (Foundation For Arable Research) trial results when selecting and this was one that definitely stood out. It’s been pretty exceptional for us, the seed weighed well and every truck that collected the grain was very full,” Earl concluded.