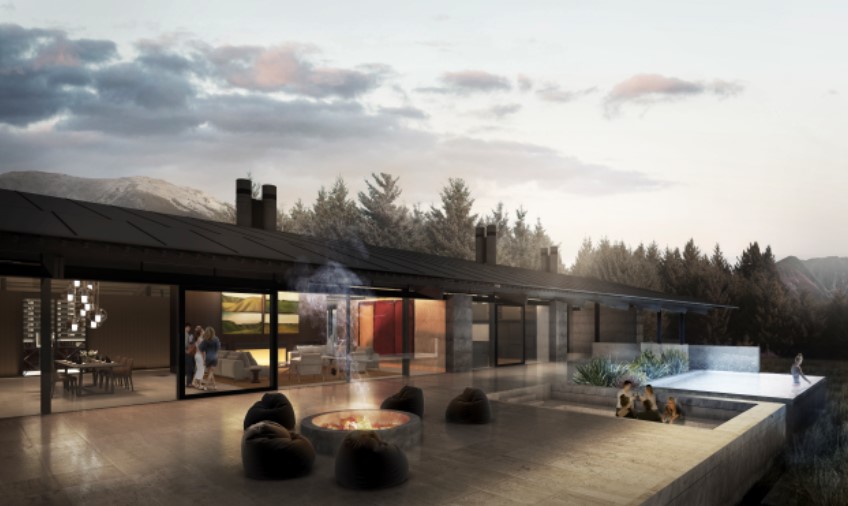 The 2019 World Architecture Festival (WAF) recently announced their shortlist for this year’s awards. There are twenty New Zealand projects named as finalists in fourteen categories.

The Lodge in Canterbury is a planned future project at Flock Hill Station, led by architect Jonathan Coote from Warren and Mahoney Architects and has been shortlisted in the House – Future Projects category.

“Our design for the homestead looks to celebrate and reference the early habitation of the landscape. Consisting of heavy limestone elements that are aligned perpendicular to the view and heavily carved to form nooks for fireplaces, seating and other residential functions,” commented a spokesperson from Warren and Mahoney.

Floating over these rock formations is a singular lightweight lattice framed timber roof.

The simple pitched roof form is a reference to the agricultural use of the land and the utilitarian, but beautiful farm structures and sheds that dot the local landscape.

A dramatic and continuous three metre cantilever creates protection at the edge of the interior spaces and the necessary verandah space to the immediate outside spaces.

The house is designed to be used in a fluid way, with almost continuous connection between internal and external spaces.

Formally, it’s a simple pitched roof pavilion with central living areas and guest’s quarters on both sides. All spaces are arranged in a single linear strip, exposing visitors to views over Lake Pearson and beyond to Sugar Loaf.

The material palette is limited and restrained – only glass, in situ concrete laid in thin layers, native timber and stone are used both externally and internally – allowing the magnificent views to be the main focus of every space.

Shortlist judging took place in London in June this year by a judging panel of international architects and experts. WAF reported that 1,000 entries were made to this year’s awards programme, which is an all-time high. The Festival takes place from December 4th – 6th in Amsterdam. Category winners will be announced in November and will be in the running to win the World Building of the Year and Future Project of the Year awards.