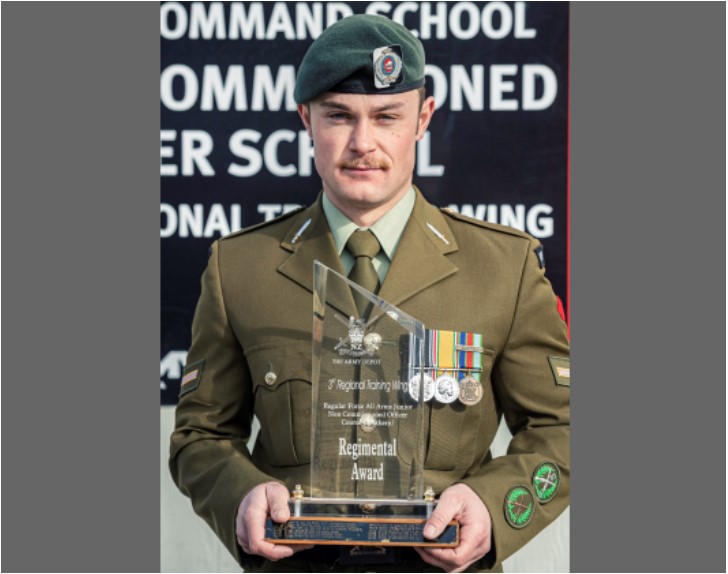 From Queensland To Burnham

Lance Corporal Samuel Puke was nineteen and at a loose end after finishing high school in Brisbane when a friend asked, “why don’t you just do what your Dad did?”

His father, Sergeant Larnie Puke, had served from 1985-2001 in the New Zealand Army’s Royal New Zealand Infantry Regiment, mainly in the Reconnaissance Platoon and sniper cell of 2nd/1st Battalion at Burnham Military Camp.

That question provided all the direction Lance Corporal Puke (Tainui) needed to trade the warmth of Queensland for basic training during winter at Waiouru.

Now one of the Army’s newest Junior Non-Commissioned Officers, he has not looked back and never questioned if it was the right move. He marched out with his peers recently to mark the completion of eleven weeks of leadership training at Burnham Military Camp, and received the Regimental Award for consistently displaying the highest regimental standards on the course.

Born in Lincoln, Lance Corporal Puke attended Darfield Primary School and started his intermediate education at Darfield High School. After a family move to Hamilton he attended Hamilton Boys’ High, and then after another move he completed high school in Brisbane.

He has always been passionate about general fitness and is a keen rugby player, and loves that the Army requires soldiers to maintain peak physical health.

“Getting paid to keep fit is an amazing part of the job,” he said. “After six years I still can’t believe I get paid to go to the gym.”

His military career has had many highlights, including being deployed in 2016 to Iraq for six months as part of the Force Protection Platoon.

“As a section member I ended up being the Platoon Signaller – the guy who works with the radios – but within our team we all filled lots of roles and did whatever needed to be done to maintain security,” he said.

“I loved being over there and I learnt so much. It was an amazing experience.”

On his return to New Zealand, Lance Corporal Puke did a Patrol Procedures course and a six-week sniper course, then joined the prestigious Reconnaissance and Surveillance Platoon, where he is now second in command of a team in the sniper cell.

Family ties to the military are stronger than ever, with his brother, Private Josh Puke, in the same Platoon, and extended family member Warrant Officer Class 1 Douglas Puke serving in the Reserve Force.

Lance Corporal Puke is looking forward to being back in the platoon at Burnham with his mates and seeing where his new leadership skills will take him next.

“What I’ve found is that if you put in the effort, nine times out of ten you’ll do well, and on the occasions where things don’t go how you expect there’s always a learning experience to help you next time,” he said.