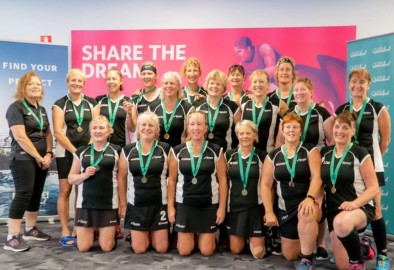 Local Darfield hockey player Jane Jenkins has just returned from the Gold Coast having played in the biennial Trans-Tasman Masters Hockey Challenge. Games took place between April 30th and May 4th and featured fourteen teams (seven male and seven female) from each country competing in seven age divisions: Over 35, over 40, over 45, over 50, over 55, over 60 and over 65. Each division played three matches and the nation that won the most divisions across the men’s and women’s competitions was declared the Country Champion. Sadly it wasn’t to be New Zealand’s turn to bring home the trophy and unfortunately, other than one team, there wasn’t another gold medal presentation. Jane was however a member of the women’s over 55 team and they were ecstatic to have taken out their division with gold-medal performances. Well done and congratulations!