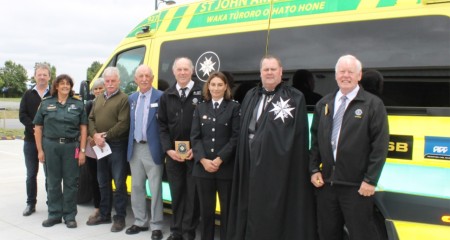 When a new ambulance was presented to Selwyn St John at the Rolleston Hub on Sunday December 6th Michael McEvedy  Knight Commander of the Order of St John said it was a very special day for both St John and the Community. He welcomed everyone to the consecration on behalf of St John Officials, staff and supporters.

The Lions gift of a new Ambulance costing $180,000, from the surrounding Clubs of Ellesmere, Malvern, Rolleston, Selwyn, Halswell and Christchurch Chinese, was also warmly welcomed by John Sunckell Chairman of Selwyn Central St John who said  it will greatly enhance their ability to cope with emergencies, in this rapidly expanding District.

The Reverend Laurence Ennor  then led a blessing for the new vehicle and all who travel therein.

Presenting the Ambulance on behalf of Lions 202-E District,  Vice District Governor John Whyte spoke of the 3,500 hours of fundraising three hundred members had put in to accumulate a local contribution of nearly $72,000 over the last two and a half years.

Lions, by belonging to the largest service organisation in the world of over 1.4 million members, were able to qualify for a grant of $96, 000 from the ’Lions Clubs International Foundation’, based in Chicago. This organisation has already contributed over $1,000,000 into Christchurch and Kaikoura after the devasting earthquakes there.

To complete the finance, Lions are grateful to Westland Milk Products, with local dairy farmer Peter Morrison as their Chairman of Directors, who donated $4,000, demonstrating their commitment to the community and to the health and safety of their employees.

John also thanked the Project Chairman Bill Pickering of the Rolleston Lions’ Club, for the time and effort he had put in to bring the project to a successful conclusion.

He further, “congratulated our friends in St John on acquiring an additional member to their fleet, hoping they would not have to use it too often – but reassuring to know you will be well equipped when called upon.”

In closing John thanked St John for the opportunity for Lions to fulfill their motto of ‘We serve’.

Bill Pickering, Project Chairman added that he had enjoyed being involved and how very satisfying it was to see the new ambulance ready to start serving the public from Rolleston Hub. He also thanked the six contributing Clubs for their efforts and the Lions who had supported him in his role as Chairman. He congratulated St John personnel for the professional and dedicated way they help people in distress, sometimes in horrendous circumstances, often risking their own lives as well. Bill thanked St John for their welcome and hospitality and presented a plaque to go on their Rolleston Headquarters as a permanent commemoration of the Lions gift.

St John staff demonstrated sophisticated features of the New Tier Three, Mercedes Ambulance most notably the power operated pull out stretcher capable of negotiating rough ground, while supporting a 395 kilogram patient, with a minimum of effort by attendants.

Costing $40,000 on its own and with heart monitoring equipment at $30,000, these two, along with other fittings, make up over  half the cost of the Ambulance.

Photos of those attending and morning tea concluded a truly Special Day for St John, Lions and the Community.