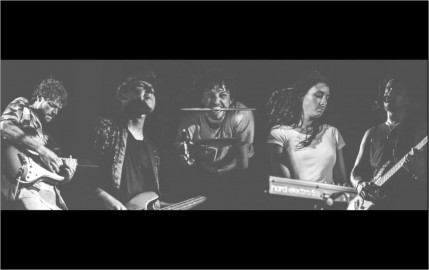 Local singer, musician, and dance teacher Saba Polderman-Charles makes up one fifth of the incredibly talented band Horizone (check them out on Spotify and itunes). The News asked Saba some questions about her involvement in this up and coming group that certainly have the right sound to see it heading to the top. Her answers are below:

Saba: There are five members to the band. Josh Burke is the lead singer and rhythm guitarist and basically writes the lyrics to all our originals! Tyler Robbins is the drummer, however he can  play any instrument he tries. Matt Kennedy is our lead guitarist. We call him Matisse so as not to confuse him with our bassist Matt Coleman who is also a great guitarist! I (Saba) play keys and synth with a bit of background vocals here and there. In regards to the many strings in my bow! I was very fortunate to have the opportunity to pursue dance and piano from an early an age and to be able to do both as a career! I’m currently a dance teacher by day and a pianist by night; I love how well it fits together. I’ve been studying piano for fifteen years, so it is very much a part of me.

News: What is the Band’s music genre?

Saba: We play a fusion of reggae, funk and dub.

News: How did you all get together?

Saba: We all (bar Matt Coleman) met at Vision College in 2015 where we were studying a Bachelor in Music. They discontinued the course after our first year, but we all ended up continuing study elsewhere. Matisse and Tyler joined the band Josh had started with Matt and they had done the odd gig before getting me on board.

News: Where have you appeared already and where are any forthcoming gigs?

Saba: We recently went on tour to promote our new releases (these can be found on Spotify and iTunes) and we played at The Mussel Inn in Onekaka, the Cabana in Napier, Meow in Wellington and Nivara Lounge in Hamilton to name but a few. We opened for ‘Sons of Zion’ last year at the Foundry which was an awesome experience. We are playing for the Noodle Markets in Wellington in April, have a gig lined up at Dux Central this month and at the Wunderbar in Lyttelton in April.

News: What are the hopes/plans for the Band’s future?

Saba: We are working on a new EP/album release and have a new music video in the works. We love what we do and love any opportunity to do it!

News: How did the Band’s name come about?

Saba: Funny story, the original name was Horizon and we found there were just too many other bands, or companies for that matter, that were called horizon making it hard for people to find us on the web. So after a year, many band meetings, and 105 names later, we settled on Horizone – with an ‘e’. The emphasis is on the ‘zone’.