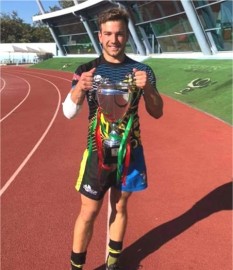 As well as this presence on the international sporting stage he’s also secured a contract with British Bury St Edmonds Rugby Football Club (RFC), located North of London in Suffolk. The RFC opportunity came in response to the Club receiving Kieran’s CV and clips of his Darfield Rugby Club appearances, along with his representative honours through his London Club.

Kieran had only been in England a few days when he was asked to play in the Samurai International 7’s Tournament in Amsterdam, then on to play in Portugal. It was an unprecedented opportunity to rub shoulders with some worldwide big names that have either represented their countries in rugby, or played in the International 7’s.

In the first round of games in Amsterdam Kieran played well, scoring five tries. One of these was in the final against France, which unfortunately the Team lost 17-12.

Next round of the Tournament  series was Algarve in Portugal where the Team met France once again in the final, but this time they beat them 15-14.

“There were teams and players from all around the world in this Tournament,” Kieran said. “I found it rather weird signing balls for people and kicking some into the crowds. Not something usually done in Darfield! But it’s a big thing in the International 7’s,” Kieran laughed.

Kieran managed to do a bit of sightseeing while away at the Tournament and of course had time to celebrate the success of beating France in Portugal.

Back in England Kieran has been training hard ready for  RFC games. He has also been asked to play in the Samurai UK team, playing in the super 7’s series leg 3 in Newbury.

Kieran commented that he still feels he has to pinch himself as he can’t believe his luck with all the opportunities he has been given; along with all the gear.

Kieran keeps in regular contact with home and is always keen to find how his old team Darfield Div1 go each week. This weekend Kieran will fly to Prague and play in the New Zealand Ambassadors game, before returning to the UK on June 27th for the Samurai 7’s tournament in London.

“He is certainly making the most of all his opportunities,” Kieran’s proud mum, Maureen