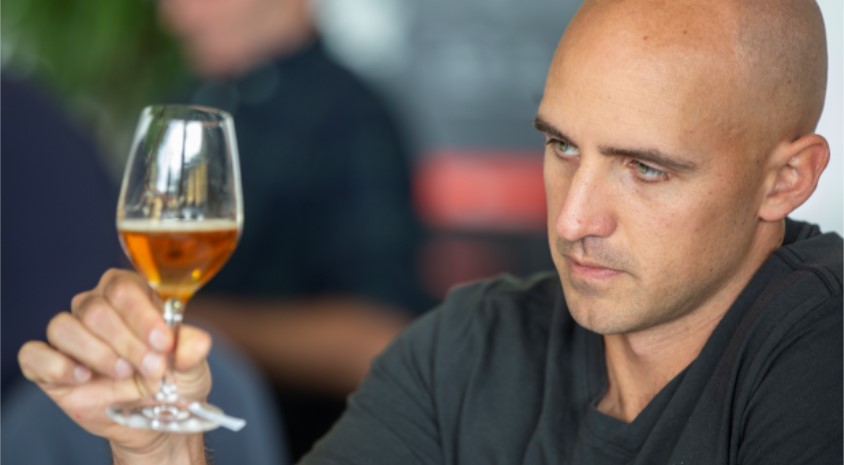 More than six hundred entries from over one hundred breweries and cidermakers from around the world competed for top honours at the New World Beer and Cider Awards, which were held in Wellington on March 11th and 12th.

Thirteen pallets of beer, cider, glasses and other equipment were trucked into Sky Stadium for the event. The sixteen strong stewarding team set up over 5,100 bottles in their correct positions in a single day and poured well over 3,000 glasses of beer and cider over the two judging days, while dedicated glass-washers kept the 1,600 Spiegelau glasses clean. Wearing perfume, enjoying a garlic-filled meal the night before, and even bringing a coffee into the room was off-limits to ensure strong scents didn’t interfere with the judges’ senses.

Amongst the twenty five experienced and knowledgeable judges was local Caleb DeFrees of Dunsandel’s, Gladfield Malt. Caleb is the Production Manager at Gladfield, where he manages the production staff and day-to-day operations of the malt-house. This is Caleb’s second year, judging at the Awards. His expertise combines a culinary background, including training at the Culinary Institute of America, a bachelor’s degree in Food Science from Cornell University and over eight years’ experience in the New York restaurant scene, with a diploma in Brewing Modules through the Institute of Brewing and Distilling. “I sort of fell into the beer industry a little bit. I started out homebrewing and then when I moved to New Zealand in 2012 I started working for a malting factory. My background is in food science, so there’s naturally a really nice connection,” he explained.    Caleb regularly judges beer competitions both in New Zealand and internationally.

“Each entry was blind judged and assessed on its qualities using a collaborative approach. You sit at judging table with four or five other judges, everyone tastes the entry, we all took notes and then collectively decided on the score,” Caleb commented.

“The broad range of experience at the table, and the collaborative judging process is really useful in helping pick up different flavour profiles we might not be used to tasting. When we all put our heads together and really pick apart the beer we can be sure it’s being judged at the highest standard,” he added.

“Overall, the key thing we are judging on is drinkability and this comes down to how well the beer is balanced. The quality of what I have tasted so far has been exceptional, I’ve particular enjoyed the range of Pale Ales and Lagers and I am really looking forward to seeing who makes the Top 30 when results are announced later in the year,” he said enthusiastically.