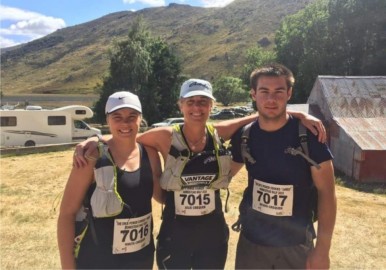 Keeping It In The Family

It was a real family affair for Darfield’s Devon Crequer recently when he competed in the St James Mountain Sport event out of Hanmer Springs. Begun in 2012 the event came about from a passion for both the Canterbury high country and ultra sports events, by its organisers.

Eighteen year old Devon entered in the Homestead Half (20km with a 529m climb) Category and won the event overall with a time of 1:42:08.  His mum, Julie and sister, Nikita also competed in the Homestead Half and his uncle, Brendon and aunt, Marina competed in the Alpine Adventure Race Category (1.5km swim, 7km kayak, 64km bike with a 1389m climb, 17km run with a 411m climb). Brendon finished third in the male section with a time of 6:32:08, while Marina finished second in the female section with a time of 7:30:11.

The Coast to Coast is a non-standard multisport competition held annually. It is run from the West Coast to the East Coast of the South Island and features running, cycling and kayaking elements over a total of 243 kilometres. It starts in Kumara Beach and traditionally finished in Sumner, but since 2015 has finished in New Brighton.

The Malvern News wishes all local athletes the best in the Coast to Coast and invites them to send in photos and information after the event.