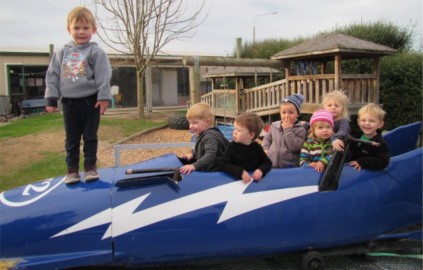 Tuesday morning, May 28th saw excited children at Annabel’s Educare Preschool in Darfield learn about being an Olympian from one of the NZ Olympic Ambassadors, who is also local business man Aaron Orangi. While Olympic ambassadors work mainly in primary and intermediate schools with children primarily in the 8-13 year-old bracket – this was a special visit. Aaron’s three year old son Beau attends Annabel’s and was really keen for his Dad to come along and talk to the children. What Dad could resist – and so Aaron, who was a member of the New Zealand Four-Man Bob Sleigh team at the Winter Olympics in 2006, Torino, Italy – headed along to the Preschool to talk to the youngsters. Aaron has spoken with students in a number of local schools recently and these visits embody what the NZ Olympic Ambassador Programme is all about.

The programme aims to engage as many young New Zealanders with Olympian role models as possible, either in person or digitally, through Chat with a Champion. It supports the goal of the Olympic Movement to build a better and more peaceful world by educating youth through sport.

NZ Olympic Ambassadors are inspirational role models living the Olympic Values. They are Olympians, which means they have been to at least one Olympic Games. They may be retired from their sport or they may still be competing.

In sharing their personal Olympic story with New Zealand school children and focussing both on the success and on the highs and lows that came with striving to become an Olympian, the Ambassadors provide a strong platform of inspiration for the students. Each Ambassador was selected as they are seen as highly positive role-models and New Zealand Olympians who have achieved one of the highest honours in sport while living according to these values.