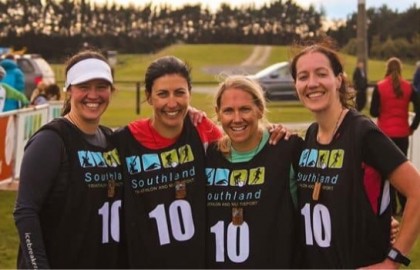 Two Selwyn based teams took on the third instalment of the Arrow 6+6 Adventure Race in Invercargill on April, 27th and 28th. Team ‘Raynauds’ was made up of Emma Wilson (Rolleston) Amy McClintock (Lincoln) Jayde Mayberry (Darfield) and Amy Winter (Invercargill). Team ‘Here We Come’ comprised of local Darfield family Janelle Schnell, Kylie Schnell and Peter Schnell, along with Regan Breen, (Temuka) – they thought they liked the sound of this event to change it up from Spring Challenge.

The race was an epic adventure with four seasons in one day; luckily not typical Southland weather. It offered a real mix of terrain – from sandy stony beaches, to  sealed and shingle road and everything in between. Starting on foot at 1pm on Saturday in Colac Bay with a possible fourteen controls to collect, required some sharp navigation and crucial calls, to get to the bike transition by the 5pm cut-off time.  The start time meant teams would likely be racing into the early evening and thus needing head torches and bike lights for the ride back from Riverton to Teretonga Raceway. Team Raynauds made a call early to skip one of the controls in favour of getting across the beach before both dark and high tide. A call that paid off, as crossing the river on dusk allowed them to cross thigh deep, rather than waist deep; as a few other teams found out. Day one wrapped up with one point losses for every fifteen minutes you were late after 7pm.

Day two was underway with Teretonga Raceway sprints, a mini Rogaine, a paddle section and some more time on the bike out to Whalers Bay, along the dunes, and enjoying some of the well formed bike trails. As you made your way back towards Teretonga, collecting all the controls along the way, there was a pit-stop for some paintball target shooting, a skill that we hadn’t trained for, but it was a fun and entertaining addition to the course. Once back to base, it was off on foot again for a Rogaine around the beautiful running tracks near Sandy Point.

This event was well worth the travel and effort to get to Invercargill. The Race Director – Ginge Burnett is keen to showcase what Southland has to offer, show off their running trails and mountain bike tracks and keep it a fun, affordable and enjoyable event.