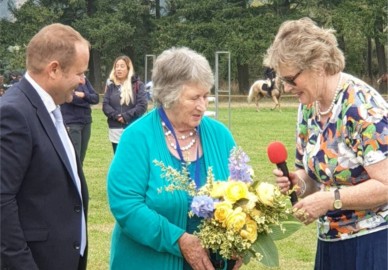 Frances Smith has been an avid supporter of the Malvern A & P Association since she moved into the community as a new bride nearly sixty years ago. Over this time Frances has been a driving force in the Decorative Flower Section, plus she supported her late husband Donald with their entries in the Grain and Seed, plus the Sheep sections of the Show.

The Sheffield Garden Club is responsible for the organisation of the Flower section at the Show and Frances has been a major supporter of the Club for nearly sixty years. She has been a major exhibitor in both the Cut Flower Section and the Decorative Section during this time. Frances has inspired many others with her love for the creative art of the Decorative Section and has readily given ideas and encouragement. Both she and Donald have in the past assisted with the set-up of the floral section of the Indoor Produce Shed. Every Show morning Donald would transport her floral masterpieces to the Show, assist in bringing them into the Shed and then leave Frances to re-erect anything that had moved during transportation!

Frances is a prolific competitor in both the cut flower and Decorative sections with her name etched on many of the Association’s Trophies. She actively encourages new exhibitors to have a go, especially in the Novice Decorative classes, giving ideas and motivation along the way.

The Malvern A & P Association Show Committee feel that Frances epitomises what the showing movement is all about. She consistently competes to a high standard and the Committee had no hesitation in recommending her for a Royal Agricultural Society Excellence medal.