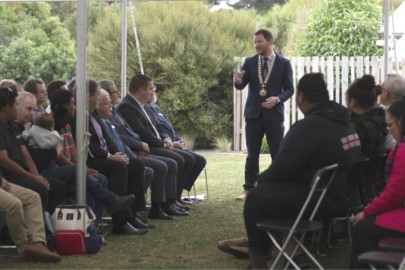 Waitangi Day 2019 was a day to remember for thirty new, New Zealanders, who became New Zealand citizens at the first ever citizenship ceremony to be held at Ngāti Moki Marae, Taumutu.

Te Taumutu Rūnanga and the people of Ngāi Te Ruahikihiki hosted the ceremony at the marae, which sits close to the shores of Te Waihora/Lake Ellesmere.

The thirty new citizens represented twelve different nationalities, some from near neighbours like Australia and Tonga, and other from as far afield as the Seychelles, India and the Netherlands.

Selwyn District Council usually holds its monthly citizenship ceremony at the Council chambers in Rolleston, but chose to hold a special ceremony on Waitangi Day at the Taumutu Marae, which was attended by around 140 people.

Selwyn mayor Sam Broughton said the event marks a first for the district. “This is the first time that a citizenship ceremony has been held at Ngāti Moki Marae, a change that I am proud of leading, and is an example of our close relationship with Te Taumutu Rūnanga,” he said.

“We work together on water health, biodiversity, district planning, and numerous other areas.

“The occasion holds extra significance due to being held on Waitangi Day and is an opportunity for those attending to gain a better understanding of local history.

“The thirty people who became citizens have come from countries all over the world to make their home with us in Selwyn, and our growing diversity is great to see,” Sam added.

Ioannis Delikostidis, from Greece, was one of the citizenship recipients, and said he enjoyed the experience of being on the Marae. “It was nice to have it here instead of in a formal place,” he said.

“I sought citizenship because I have been here many years and feel like I’m already part of the society and the Country,” he commented. “Citizenship is something that helps you feel like you are integrated and part of the whole.

Ioannis, who is a senior lecturer in Geographic Information Science at Canterbury University, said he and his wife moved to New Zealand when they were looking for somewhere to raise their family, and recently settled in West Melton.

“We’ve just moved to Selwyn. The people are friendly and although it’s close to the city, it’s still a bit out of the way so you don’t have all this traffic and a busy setting around you. It’s a nice, safe, quiet, peaceful place with lot of young families, so it’s a really amazing place to live. We’ve got some land – so I mow the lawn now!”