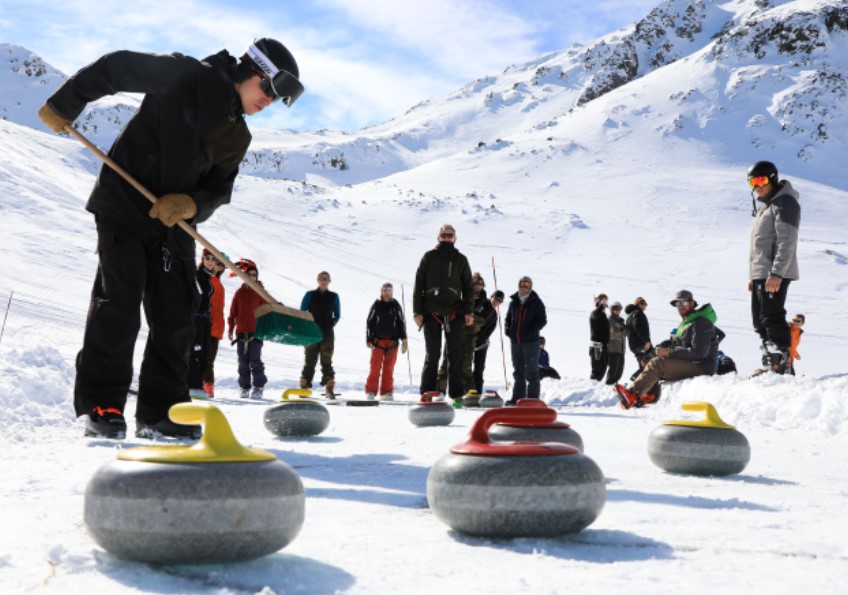 The Mt Olympus Curling day, held on Saturday, August 24th was reported to be a magnificent event.

‘Tarnspeil’ (the kiwi version of a Scottish winter sport) was held on ‘the Tarn’ at the top of the spectacular Mt Olympus ski field which is 1800 metres above sea level.

“This is a unique event which really shows our Club spirit,” said Club Captain Phil Freeman. “The curling began in 2011 when we received some funding as part of the Rugby World Cup promotion to showcase true kiwi events. Since then we have tried to run a curling day every      year, but weather and ice conditions have not always been favourable,” he added.

“This year we had a bluebird day. Over one hundred people enjoyed watching eight teams compete in ‘Tarnspeil’, curling their way through a round-robin which led to a highly entertaining semi-final and cliff hanger of a final,”  Phil explained.

It was reported that the final saw a Windwhistle Winter Sports Club (W.W.S.C) team take on a team of misfits from Methven! The final was tight with a high standard of curling which saw the crowd on their feet. With just one curl remaining the W.W.S.C team had to swing around the guard stone and tap the rearward sitting, competitor’s stone, out of the circle to take  a possible, much-deserved, victory. However, in a cruel twist of fate, the stone gained a small wobble enroute to its target, having likely encountered some rougher ice near the edge of the sheet. The stone swivelled this way and that, as the crowd held its collective breath. But luck swung the way of the visitors and the stone missed its target by the narrowest of margins. Leaving the Methven misfits to enjoy the spoils of victory.

“Whether you are curling, or spectating, this is a great social event. We enjoy welcoming Club members and visitors to our Field, the curling embodies who we are as a Club,” Phil concluded.