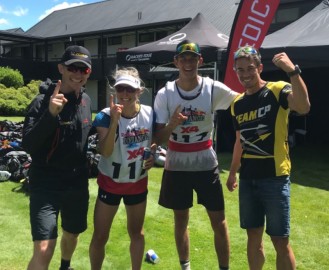 Richard Greer and Jake Vargo from Kirwee, Hannah Presswood from Rolleston and Oliver Thompson from Whakatane were a local success story in the fifth Red Bull Defiance multisport race which was held in Wanaka on January 19th-20th. They competed in the four person teams’ event which was introduced for the first time this year.

Approximately thirty teams competed in the four person section of the event which comprised of mountain biking, running, kayaking, canoeing, abseiling and a mystery team challenge (knife throwing). The team finished the race in an impressive time of 11 hours and 43 minutes.

Richard and Jake had both competed in the two person event last year and found the new four-person teams’ event allowed them to complete their sections of the race as fast as they could. It also allowed team members to compete in their areas of strength and work together as a team. The four person section allowed four team mates to work together over six challenging stages of the race. Teams are only allowed a maximum of  two members at a time to be competing in each stage. The other team members acting as support crew while not competing.

Red Bull Defiance is an event that attracts many of the world’s best endurance athletes. Designed by Braden Currie, New Zealand’s foremost adventure and multisport racer, the course was planned to test athletes over two challenging days, racing alongside the world’s best multisport and endurance athletes. The Red Bull Defiance was intended to challenge competitors both mentally and physically.