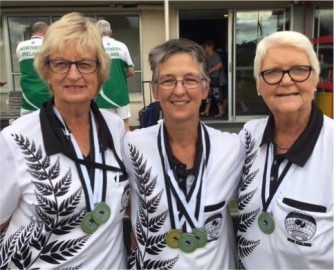 Barbara Herrick, Hazel Littlejohn and Margaret Bailey are from West Melton, Darfield and Leeston Bowls Clubs respectively. The New Zealand team was made up of both men and women members from throughout New Zealand. Both Barbara and Margaret have made regular appearances for the Games in the past, while this was fourth year bowler Hazel’s first International call up. Players from the Republic of Ireland, Northern Ireland, Scotland, Wales and Australia descended to Christchurch to participate in some very closely fought competitions.

It was reported that, the women’s team played great games against Scotland and Wales beating both teams to sit second on the table behind Australia. On the last day of competition (Sunday), saw the women battling it out with the Australian’s again. Unfortunately they were disappointed not to beat them in the fours and singles but after lunch, the tables turned around for New Zealand and they won both the triples and pairs against them.

Barbara and Hazel came away from the championships with a gold medal each in the Triples which they played with Patricia Hansen from the Terrace End Bowling Club, Silver for the fours which Carolyn Wilks and Joan Richards both from the Fitzroy Bowling Club also played and Silver overall for the Women’s team. Margaret was reserve and part of this silver medal winning team. The men’s team also came away with a gold medal for John Lavell (Sumner Bowling Club) in Men’s singles and Sliver for men’s team overall.

Dennis Herrick, Barbara’s husband is the President of the International Deaf Lawn Bowls Federation, it was reported that he had done a fantastic job, organising and ensuring the smooth running of the Games.

On the rest days, trips to Akaroa, Antarctic Centre and the City were organised for the players and visitors.

The International Deaf Bowls Championship is an empowering event that is crucial for members of the deaf community. Deaf people can often feel a sense of isolation in a hearing dominated world and without deaf sport the deaf community would lose the ability to thrive.