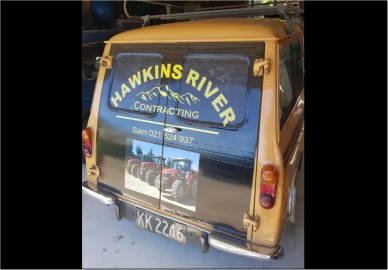 For the sixth time, sixty teams will drive their Minis from Kaitaia to Invercargill, a total of 2606 kilometres, in the Pork Pie Run raising funds for charity KidsCan. After six days and seven nights only the best prepared, the fittest, the strongest, the desperate, cunning and most courageous will arrive in Invercargill, it has been reported.

The event which takes place at Easter (April 19th – 24th) will see participants depart in the  Canterbury area from Christchurch on Monday, April 22nd en-route for the Coast via Arthur’s or Lewis Passes to Greymouth/Hokitika/Harihari before arriving at Franz Josef.

Amongst those crazy enough to be crammed into a Mini and driving the length of the country are ex-local Sandy Williams and team Beef and Brick (ex-local John Elstob and Darfield’s Wayne Boyes).

Sandy’s team of mother and daughter (Sandra and Sam) are the G & T Girls and they’ll be taking their Mini – named Gordon – through its paces as they travel the length of New Zealand. One of their sponsors is local business Hawkins River whose name will remain on the car for six months when Gordon returns to Christchurch commuter duties.

Team Brick and Beef’s mini is currently in Hamilton but the News has been assured that when it heads southwards on the Pork Pie Run, it will come through Darfield and hand out some promo information along with a few lollies for those watching and waiting.

In honour of their nicknames the pair have had the Mini decorated with 25 Bricks on one side and 25 Steaks on the other. Anyone donating $250 or more can get their name/business in either a steak or a brick!

The Pork Pie Run has its roots in the 1981 movie ‘Goodbye Pork Pie’ when, using a stolen driver’s licence, a Kaitaia local hires a Mini to go in pursuit of his wife who’s moved to Invercargill without him. Naming the little Mini ‘Pork Pie’ he hits the road at speed with the Police understandably taking a dim view of his exploits and making it their mission to thwart him from reaching his destination.

The charity Pork Pie Run will raise funds for KidsCan which aims to help the 290,000 New Zealand children who live in poverty. KidsCan provides Kiwi kids in need with food, clothing and health items at school, so they can get into the classroom in a position to learn. KidsCan does this because they believe that education equals opportunity, and all children, regardless of their social economic background should have an equal chance.

Go to porkpiecharityrun2019.gofundraise.co.nz and help raise much needed dollars for this worthwhile charity, while supporting a favourite team in their quest to complete this epic journey.