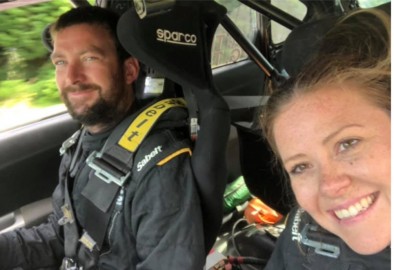 Having competed together for three years, Darfield’s motorsport husband and wife duo Garet and Gemma Thomas, part of the Woodend Automotive Racing Team, have had just had recent success in the Westland Rally. They drive a 2008 Subaru WRX STI, which was built by Gemma’s dad, Dave Ollis of Woodend Automotive. The pair are currently competing in the New Zealand Rally Championship Cat 5A and the Mainland Rally Series, of which the Westland Rally was a part.

The Westland Rally is a favourite of Garet and Gemma’s, as they love the tight twisty forestry roads and is an event with a bit of everything in it. However it wasn’t all plain sailing as their day didn’t start wonderfully when the engine encountered a problem. This was sorted out in service and they headed off to stages three and four, managing to bring in a fifth and a second, putting them back up into contention for overall placings. The rest of the day continued going to plan and Garet and Gemma managed a third in SS5, a stage win in SS6 and top 5 stage times in SS7 and SS8  to bring them up to second overall.

Gemma was originally introduced to the sport of motor racing by her dad, who began competing again after a twenty five year hiatus. Both Gemma and Garet come from motocross backgrounds, and had both always had an interest in motorsport. When each were offered the chance at co- driving just over three years ago Garet quickly discovered he would rather be behind the wheel. They bought their first rally car an EVO 2 and competed with great results in their first year  together winning E class (pre 96) in the Mainland Series.

The following year Gemma and Garet were given the opportunity to drive a new car, built by Gemma’s dad. After a niggly start to the year, their results picked up and they finished third overall at the Nelson Rally and second overall at the Hanmer Rally, before finishing with a fourth overall at the Ashley Forest Rally Sprint; nailing the under one minute mark (59.67sec).

Garet and Gemma are extremely grateful to their sponsors for all their support, knowing that without it their focus may not be so clearly on the competition.

The pair are looking forward to Rally Otago which is to be held from April 12th – 13th and which is the first round of the New Zealand Rally Championships.