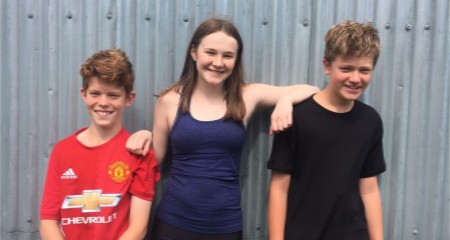 From April, 12th – 14th 2019 Kirwee Players will present Shrek JR – The Musical, on stage  at the Kirwee Community Hall.

The News spoke with their publicity person and asked some questions:

Tell us a bit about the play?

Shrek JR is based on the movie of the same name. It follows the story of Shrek a grumpy ogre, who just wants to be left alone in his swamp and his trusty stead, the hilarious Donkey. They are tasked with finding and rescuing Princess Fiona and bringing her back to marry the very short and irritating Lord Farquaad. During the rescue Shrek and Princess Fiona fall in love. Along the way they encounter all the fairy-tale creatures and have to fight off a scary dragon. It is such a funny show with so many great songs that everyone will recognise from the movie.

When did practice start and how often are you practicing?

We held auditions in December and everyone has had a great Christmas break, learning their lines. We started rehearsals on Sunday, January 27th and will rehearse three days a week until the final week where we will rehearse every day until the show dates.

How many cast members are there and what are their ages?

Kirwee Players is producing the play. Kirwee Players is a long standing theatre community group that has been putting on shows since 1977. In our 2016 show Oliver, we had a large children’s cast and they were really keen to continue performing.

Liam Morris, a thirteen year old, student at Darfield High School, has secured the role of Donkey in the forthcoming production.

How did you feel when you found out that you were cast as Donkey?

What have your family and friends said?

Mum found out before I did, so she told me when I got home from tennis. She said, “hey guess what, you have been cast as Donkey!” I said, “Wow”.

I’ve told most of my family, I think there a quite a few that are hoping to come.

How many times have you watched Shrek? What’s your favourite part?

I actually haven’t watched it much, apart from ages ago.

My favourite part is the start of the movie where Shrek is walking along and Donkey just comes along and starts annoying him.

What is your favourite thing about Donkey as a character?

He’s a bit like me – my usual character. He’s quite out there; thinks he’s funny; he’s the annoying one that’s friends with everyone.

What have you liked most about the rehearsals so far?

My favourite part is when you listen to everyone else singing as well, it sounds really nice.

Which town in Selwyn do you live in?  Darfield.

What other things do you like to do in your spare time?

I do Hip Hop dance and Acrobatics at TM Dance World and play tennis for Darfield Tennis Club.

I also like playing on my computer – I play Fortnite.

How do you fit all that in?

I have Monday’s off!