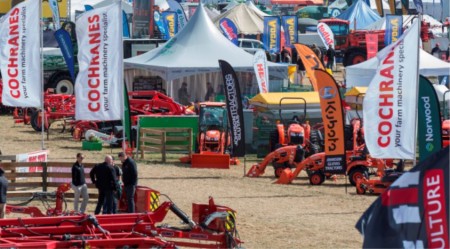 Despite some literal and figurative clouds overhead, the 2019 South Island Agricultural Field Days (SIAFD) was a success, organisers said.

The biennial event took place on March 27th to 29th at the SIAFD’s permanent site outside of Kirwee and it hosted more exhibitors than ever before and more machinery was at work during the in-field demonstrations.

SIAFD media spokesperson Daniel Schat comented that despite the tragic events in Christchurch on March 15th and the flooding that prevented some West Coasters from attending the event, the car parks at Field Days were near capacity and attendance was strong.

A moment of silence was held at noon on the opening day to honour the memory of the victims of the terrorist attacks at the Christchurch mosques.

“We had 640 exhibitors this year compared to less than 600 at our last event in 2017. Feedback from them has been very positive. The introduction of the Diesel Tune NZ Tractor pull was another a positive addition with crowds of people gathered there throughout the field days,” Daniel said.

A number of politicians dropped in on SIAFD 2019. They included Minister of Agriculture Damien O’Connor, local Selwyn MP Amy Adams, and Minister of Conservation Eugenie Sage.

The SIAFD site has twenty hectares of exhibitions and ten hectares devoted to machinery demonstrations. Machinery demonstrations organiser Andrew Stewart said the demonstration area included 4ha of grass, 1ha of fodder beet, 1ha of maize for harvesting and 3ha of grain stubble for cultivation. “Twelve different companies demonstrated their machines and that included four companies who demonstrated four different machines,” Andrew said. “We also had four or five machines that were new to New Zealand. They included the Weaving disc drill from the UK, a drone that does spot spraying with a five-litre tank and a fire suppressant system for combine harvesters.”

SIAFD is organised entirely by a team of 27 volunteers, this year captained by organising chairman Rodney Hadfield. With the 2019 event now in the rear view mirror, they will take a break and then in a year’s time they will start getting ready for the next event, which takes place March 24-26, 2021.