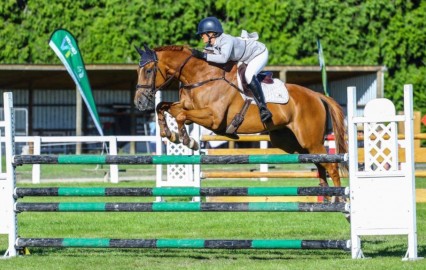 Merv was bred at Willow Glen Stud in Waimate and he trialled three times as a race horse,  but was unsuccessful. Kirsty purchased him in 2010 describing him as a weedy wee thing back then that took quite a while to strengthen up. However he showed huge promise right from the start. Merv and Kirsty have formed an amazing partnership over the years and have had success in many disciplines, from show hunter, show jumping, dressage, eventing and have even tried their hand at showing, but apparently that wasn’t really Merv’s thing. Kirsty and Merv had had plenty of success over the years together, they won the National Three Day Event 2* title in 2016 and also took out the Amateur series that year, as well. In 2018 he won the National Show Jumping Championships Pro Am title and defended his National Derby Championship that year too. This season has been a little mixed for Merv and Kirsty with success at the South Island Three Day Championship placing second in the CCI3*. This year has started off well for Kirsty and Merv with their win at Waimate. Merv showed his nimbleness and tidy technique through a very challenging course. Kirsty and Merv made the course look easy jumping clear in a time of 73.36 to take this exciting win. The plan now is to do a  little show jumping(show jumping is a competitive competition in which each horse and rider combination are judged over a set course of obstacles. The winner is decided by faults and speed over the set course.) and dressage and then the pair will be working towards the South Island One Day Eventing Championships in April and hopefully head North to Taupo in May to have a crack at the 4*.

Kirsty has horses in her blood having a horsey mum and rodeo dad. She first started riding at two years old on a pony that had been broken in by her mother. Kirsty had a break away from riding for about eight years while she was getting her bachelor of physical education degree and diploma of teaching at Otago University where she focussed on athletics with the 400m hurdles being her main event. In 2002 she moved to Christchurch to teach Physical Education at Burnside High School and after retiring from athletics due to injury, she returned to riding via track work for Margaret and Neil Ridley. Since resuming riding Kirsty has never looked back, her passion and commitment for horses is as strong as ever. Kirsty is heavily involved in the equestrian world being the South Island Riders Rep and on the Equestrian Sports New Zealand Eventing Board, as well as being Chairperson of Eventing Canterbury. Kirsty is grateful for her sponsors and her team of horses and commented she, couldn’t get by without help from her mum, Merle Ogilvie.