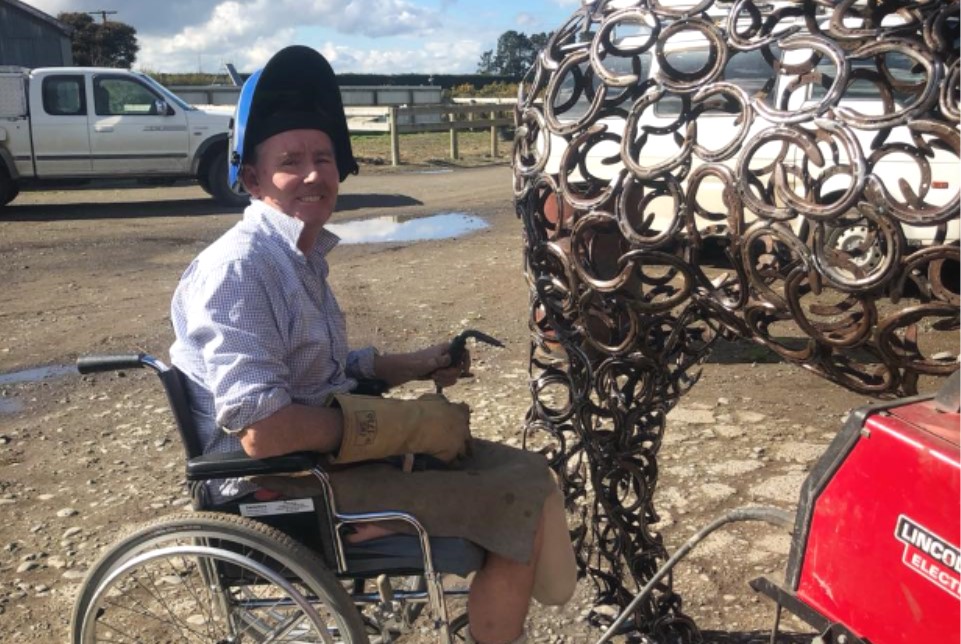 One year ago Kirwee’s Andy Thompson lost his leg below the knee. The original 2015 accident that caused his leg injury occurred in a fall from a ladder while building a house. After the fall he spent many nights in hospital and endured six operations trying to fix the damage. Daily nursing visits to dress the leg took place over an eighteen month period, then years encased in a moon boot followed. He admits to thinking that he may have to spend the rest of his life in the device!

Developing cellulitis (a bacterial infection of the skin and underlying tissues) on Christmas Day 2017 was the final straw and resulted in him being admitted to hospital a week later. Months of treatment to stave off the infection followed before it established itself in his blood stream. Leg amputation was the only way of saving Andy’s life.

However being the true horseman that he is Andy wouldn’t allow the amputation to go ahead until he had ridden in the closing hunt for the season! His wish was granted and he rode in the closing hunt on July, 10th 2018, before his leg was amputated on July 12th.

Then followed many weeks of recuperation and rehabilitation. As soon as Andy had learnt to walk, the natural progression was to get back on to a horse. It definitely wasn’t an easy task and there were more than a few falls while learning to jump, with only one leg. While his family were obviously concerned about further injury, Andy’s love of jumping won out and he’s once again perfected the skill – even making it look easy!

Andy is the Field Master for the Christchurch Hunt Club and helps out the huntsman with keeping the hounds fit. He also assists by being a whip on the hunt field. (A whip assists the huntsman during the day’s hunting; keeping the pack together; resolving any problems that may occur during the day; rounding up any missing hounds.) His family love that Andy is back out on the hunt field with them and are so very proud of his determination and all that he has achieved – truly an inspiration.