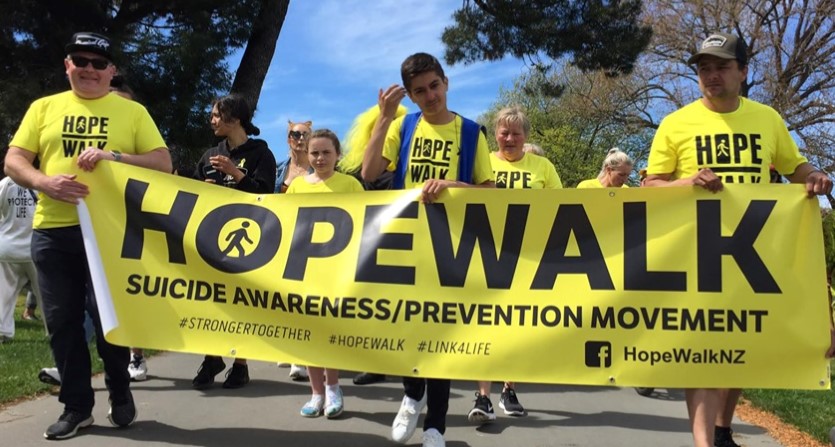 Hopewalk Christchurch held its third annual walk on October 20th at North Hagley Park. This event encouraged participants to come together for a public walk to raise awareness about suicide prevention.

There was a sea of yellow (which is the international colour for suicide awareness) at North Hagley Park as members of the community took a 3.3 km stroll together around the venue.

“There was a very positive, uplifting, feeling around the Park and the weather was great,” commented one of the organisers, local Penny Rhind. Those attending were checked on to ascertain if they were OK and information was freely available for any who wanted/needed it.

MC for the event was Rob Mokaraka, who knows first hand what it’s like to be struggling on the inside, while things look fine on the outside.

Rob had a mental breakdown and initiated his getting shot by police in 2009. Ten years on, his life now has focus and he has become well known for his play ‘Shot bro: Confessions of a Depressed Bullet’. The production  has been performed about a hundred times around the country. Rob has turned his suicidal act into something positive, something he hopes can help others in need.

A guest speaker at the event was Angel a seventeen year old  who spoke of her struggles and brought those attending both inspiration and hope. Hopewalk participants were entertained by a music DJ who was described as ‘fantastic’ and numerous food vendors were there to help with refreshments.

The event brought people of all walks of life together to support each other, while trying to help with the prevention of suicide. Supporting each other with this sensitive and very important issue is seen to be incredibly  important, as suicide affects so many people. Hopewalk organisers thank everyone who helped them with this event commenting that the support was amazing.

“Anyone needing help/support shouldn’t be afraid to ask. Always look after your friends and whanau, even if sometimes they don’t want you to,” was one of the messages organisers would really like to get across to people. Along with the Hopewalk motto, ‘Stronger Together’.”

If anyone is able to make a donation to Hopewalk Christchurch (who are a not-for-profit, registered charity) it would be gratefully appreciated.

Full details are available on the Hopewalk Christchurch Facebook page along with some important mental health contact details.