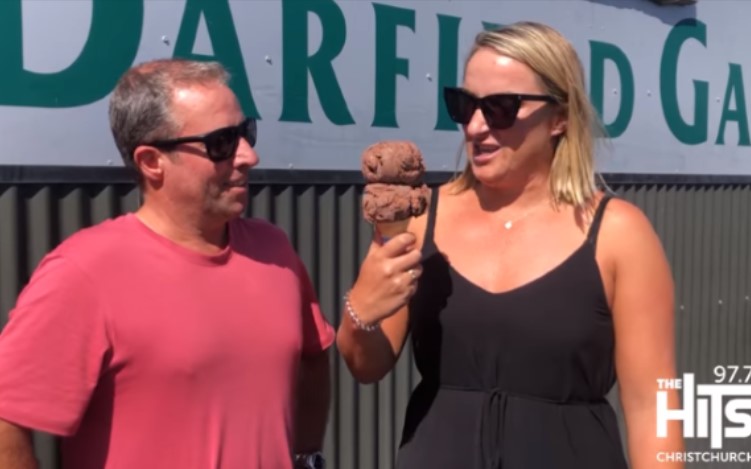 A definite positive for the local  area is the naming of Darfield Dairy as sellers of the biggest ice creams, by the Hits Radio Station, Christchurch.

The same station ventured into Darfield with their recent ‘Best Pie competition also!

The Hit’s Brodie and Fitzy were obviously ‘forced’ to market test the products to assure their audience the results were correct. Darfield Dairy took the honour of Christchurch’s Biggest Ice Cream (yes, we know Darfield isn’t Christchurch!).

The Darfield Dairy has been owned for the past seventeen years by local Errol Barnes. The business is ably managed by another local, Mike Gilmour who has been at the helm since 2008.

Mike commented that he didn’t recognise the people from the radio station when he served them. “I did think it was a little strange that they ordered two scoops of the same flavour (chocolate),” he said. “Most people when ordering two scoops generally ask for two different flavours,” he added. He laughingly said it was probably a smaller sized ice cream than he normally serves, but was obviously still a winning one!

The Darfield Dairy sells both Tip Top and Chateau ice cream and currently has about twenty to thirty different flavours across their three freezers. Mike said their most popular flavours were gold rush, goody gum drops and boysenberry and they sell a whooping nineteen tonnes of ice cream a year.

“Our ice creams have always been big, but they have got slightly larger over the last two or three years,” Mike said. “Ice creams are a great seller and are extremely popular,” he concluded.

A single scoop ice cream will cost people $3 at Darfield Dairy with many commenting – “it’s a very large small scoop!”