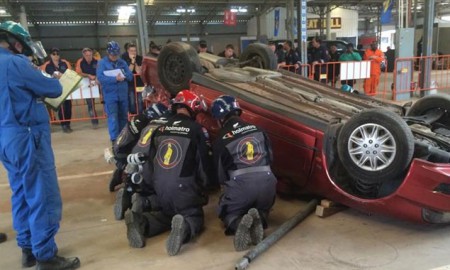 Rolleston Road Rescue have taken out some impressive awards at the Australasian Road Rescue Challenge, held in Alice Springs, at the end of July. The team showed great skill in the three day competition, coming away with a First: Entrapment, Third: Time critical, Third: Overall Championship and Third: Top Medic.

Of the three New Zealand teams participating in the competition, the Rolleston team was the only one to come first in a challenge.

The Entrapment challenge, consisted of two ‘patients’, one physically trapped under a motor vehicle, the other trapped inside. The team had to extricate both patients, complete a medical assessment and provide appropriate medical attention, as well as completing a professional hand over to arriving medics.

Training for these events is taken very seriously with the six members of the Rolleston team committing to an additional six hours of training per week, for many months, prior to the event. Team captain, John Trounson said one of the most valuable training opportunities prior to competing was being able to go to the yard of Pick-A-Part in Christchurch to get some valuable real life experience cutting up vehicles.

The Rolleston team has attended the annual competition for the last four years, placing in the top three in the last two. John commented, “there are always some nerves when you are representing New Zealand in international competition, but most of the team had competed in past years which really helped.”

The hardest part of the challenge was dealing with the significant change in temperature, having left NZ with single figure temperatures to face 20+ degrees in Alice Springs. In addition, several members of the team came down with the flu while away.