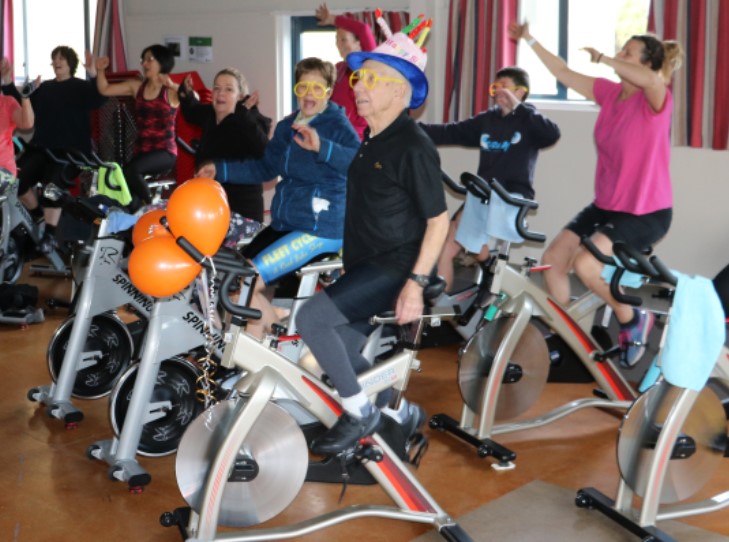 To celebrate turning ninety two on July 17th, Len Cotton decided to go for a spin!
Len is one of the most enthusiastic members of the Rolleston Community Centre spin classes – which he attends three times a week.
With the Wednesday class falling on Len’s birthday, class members decided to mark the occasion for one of their most inspiring members.

“Len has been a member of ‘Mature and Motivated’, a Council run, low impact, fun exercise class for people over fifty and while he still occasionally attends, spin has become his main focus,” Group fitness instructor Kim Roberts commented.

“Len, a keen cyclist, was encouraged to join spin classes about six months ago after a conversation with one of the group’s members at a café,” Kim reported.

“For ninety two he’s pretty fit. He shows up some of the younger ones sometimes too,” Kim laughed. “If he’s not cycling indoors he can be seen sometimes cycling outdoors,” she added.

“There are more benefits to the classes than just staying fit,” Len explained. “I’ve met lots of new people, they’re a very social bunch and we all go for a coffee afterwards. It’s where you go to make new friends,” he added with a smile.

Len’s also a fan of the music played during the class and can occasionally be seen at warm down with the instructor’s microphone singing along!
Although they do try and celebrate birthdays in the class, Kim said they were very keen to do something a bit different for their inspiring oldest member.
“We’re all mother-hens to him,” she said, “he’s amazing, an inspiration for all of us that age is no restriction. We just wanted to make this birthday extra special for him,” Kim concluded.

Council spin classes are available at Rolleston Community Centre and spin and junior spin classes at Lincoln Events Centre, with a range of morning, mid-morning and evening times.