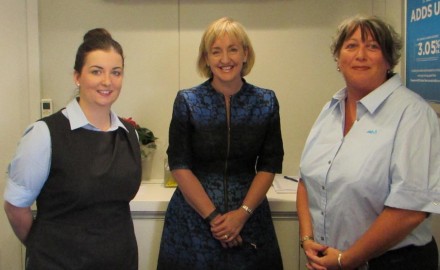 It’s now easier and closer to get banking done in Selwyn as the ANZ celebrated the opening of its new branch in Rolleston on Friday, February 12th.

ANZ recognises Rolleston as one of the fastest growing areas in New Zealand and the Bank’s presence there is a real vote of confidence in the future of the town, which has seen strong migration since the  earthquakes. “We have closed the Main South Road branch, but customers in that area are still served by the same friendly staff who have moved across to ANZ Hornby,” said Jonathan Ahlfeld, ANZ Business Banking Manager at Rolleston.

“Rolleston is a fantastic place to live, and has a thriving business community too,” he added.

The opening ceremony was attended by about 25 people, including local Selwyn MP, Amy Adams, the Deputy Mayor of Selwyn Sarah Walters, Selwyn District Council CEO David Ward, local councillors, business leaders, developers and staff. Amy gave a speech welcoming the addition of another bank to what is becoming a hub of banking around Rolleston Square. “The opening of the ANZ branch is reflective of the significant growth in both the residential and business population in Rolleston and the greater Selwyn area during recent years,” Amy commented.

The design of the branch is the same as that used in Cashel Mall following the earthquakes, and in other locations around New Zealand to great success.

“The feedback has been terrific – we even had one super excited customer who started dancing when she walked in because it saved her a fifteen-minute drive to the nearest branch,” Jonathan smiled. “The team is really looking forward to meeting the local community. I am a Rolleston local and I know how much it means to Rolleston to finally have New Zealand’s largest bank in the community. With five retail staff and one dedicated Business Banker, we now have the expertise to help the Rolleston community achieve their financial goals. The branch will also be home to a Smart ATM – accepting deposits and cheques, as well as all the normal ATM functions and is open Monday – Saturday 9am – 4.30pm.”