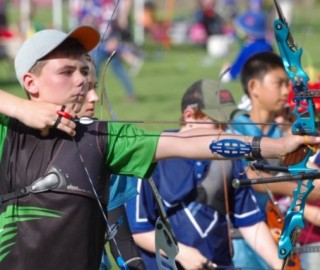 During the April school break Rolleston’s talented archer Ryley Griffiths attended the Australian Youth Nationals in rural New South Wales. Over 130 of the best youth archers were in attendance and competition was fierce.

Ryley achieved fantastic results bringing home a bronze medal in the 1440 where he shot a new personal best at 1318;  only five points separated the top four archers in this division. He also shot an incredible 682 in the 720 event which was another personal best; Ryley missed out on a medal by only one point. Again the top four archers in this division all shot over 680, which was a new Australian Cub Male Recurve Record. During match play rounds Ryley was able to shoot against the top U20 male recurve archers. He shot impressively and experienced the standard of competition he will face at the forthcoming World Youth Championships.

Ryley is home now and back to his training schedule and school attendance. His focus is now on shooting five days a week and swimming two days a week in preparation for what will be the biggest event in his young life to date – the World Youth Championships in Madrid – August 2019.