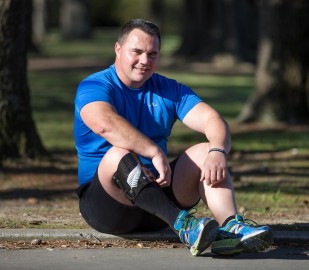 When Private Dion Taka’s torso was pierced during enemy fire in Afghanistan three years ago, the New Zealand soldier from Burnham, had no idea that his shattered body would one day be strong enough to run in a marathon, but this month, Dion did just that.

Returning home injured, Dion had to learn to walk again, he had to learn to move, jump and run. Some days, it felt like he’d even have to learn to smile again. The experience took a mental, emotional and physical toll on his entire family.

As a result of Dion’s injuries he also experienced acute pain, which was later diagnosed as complex regional pain syndrome. Rehabilitation for the injuries visible to the eye was intense, let alone the pain within. The journey continued for months with Dion focussed on rehab, while his wife, Frances Taka kept the family together and found new norms.

Dion is aware he’s not the only soldier  to return from conflict injured and requiring healthcare. Before his diagnosis, he was told his pain was ‘all in the head’ by several clinicians before finding a Pain Specialist that was finally able to help him. After persistence and perseverance, and a battle, Dion’s wife was finally able to access the spinal cord stimulator recommended to help him.

Now Dion has been elected as part of an elite group of international runners for the Medtronic Twin Cities Marathon in the United States – something he wondered would ever be attainable. The father of three, is keen to prove that Kiwis ‘don’t give up’ and have a well-deserved place amongst the world’s best. But Dion is not just running this race to highlight he is ‘back’, he is running for the thousands of people in New Zealand, himself included, living with chronic pain. Before Afghanistan, Dion fought to protect NZ, now he has a new battle – the battle to reduce the stigma associated with chronic pain in New Zealand.

25 runners from sixteen different countries participated in the Global Heroes programme. Each runner has a medical device to treat a condition such as heart disease, diabetes, spinal disorders, chronic pain or neurological disorders.

The Medtronic Global Heroes programme, launched in 2006, celebrates their accomplishments and passion for running, which serves as an inspiration to others living with chronic diseases.

Dion knows there are many ‘heroes’ without a voice and so, alongside his wife, he is prepared to share the story of their family for the betterment of all. ‘Hero’ is a word that should never be used lightly, but for some people it truly defines how they are seen and how they should be seen. A Global Hero, an ANZAC, a father, a husband… one man living with chronic pain determined to make a difference.