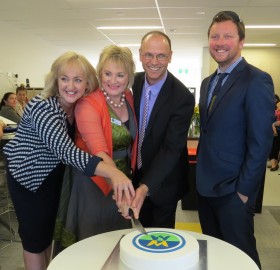 On Friday, March 10th the new West Melton School learning hubs, Kōwhai and Mānuka, were officially opened by Hon Amy Adams, MP for Selwyn. The opening ceremony was well attended by  local dignitaries, past pupils and BoT members. They all had an opportunity to walk through the new learning spaces as well as the upgraded Totara and Ti Kouka buildings. Selwyn Mayor Sam Broughton attended with Councillor Mark Alexander and members of the Taumutu Marae blessed the building as part of the ceremony. Also in attendance was Justin Tipa, the Kaikarakia who performed the ceremony, Liz Brown, Kaiarahi Matua at Canterbury University, Daphne O’Connell, Chair of Kaumatua Council, Patrick Nutira, Deputy Chair and local Kaumatua and Margaret Joans, Kaumatua. Past 2016 Head Students, Bella Groen and Alessandra Ward returned the first sod to the ground, that was removed  last year.

​West Melton Primary gardening students, the Eco Warriors have done it again! They recently competed in the Oderings School Garden Competition, run by the Christchurch Horticultural Society. The Eco Warriors involved students from junior and senior classes and the theme of ‘Once Upon a Time’ refers to the wonderment of fairy tales and myths, included  New Zealand legends and a glimpse into worlds that are far away from the present. The school was very excited to receive a Gold award.