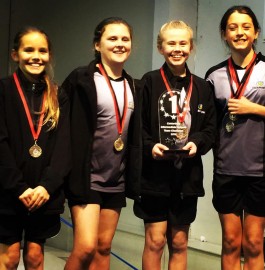 Willow Mountford is primarily a trampolinist herself, but is so passionate about the sport that she also manages to find time  between her own practices, to coach the other three members of the Clearview trampolining team; Sophie Parker, Sarah Faulkner and Emma Jackson.

The girls had a great run and the talented team took out overall first place at the event.

Willow then went on to compete at the South Island Trampoline Championships held at Olympia Gymnastic sports on June 18-19th. She gained an impressive third place for her age group and also came first in the synchronised category with partner Jade Mitchell (Ellesmere College) – which was no easy task.

Willow intends continuing to compete and will attend the October National Trampolining Competition, to be held in Invercargill, as part of the Canterbury team.