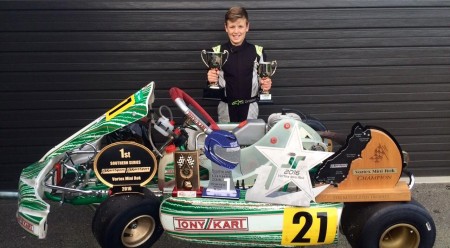 Clearview Primary School student, twelve year old Zac Christensen was understandably  proud of his win at the South Island Sprint Championships held at labour weekend, and hosted by KartSport Canterbury. Zac fought a hard Battle for the South Island Title and finished the race four seconds ahead of second place. He also got the track record on the same day.

Zac, who races in the Junior Restricted class, has had a great year, winning many events around the South Island including the Mainland Series, Southern Series, Spirit of the Nation Southland and the Jason Richards Memorial meeting in Nelson. Zac also races regularly in the North Island and finished fourth overall in the WPKA series run across the four tracks in the bottom half of the North Island.

Zac’s goal now is to win a New Zealand title at the 2017 Easter Nationals hosted by KartSport Invercargill.

To continue in the sport Zac would love the support of local businesses, and hope they will see it as a great opportunity to support a future superstar.

“In the last twelve months Zac has won multiple events in his class,” said proud mum Shona Christensen. “He took out first placing in nine extremely intense races.  This included the Invercargill Spirit of the Nation which was raced in both normal direction and reverse. Add to that the Enduro meeting when he lapped the whole field – in 48 laps.

“Zac’s next big competition is the Nationals in Invercargill, where competitors from throughout New Zealand will vie for honours,” Shona concluded.