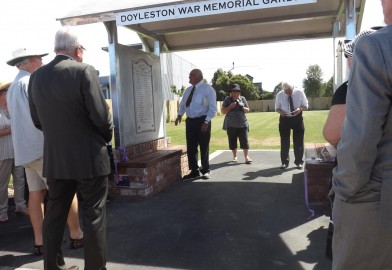 People came from far and wide to attend the Doyleston War Memorial Garden opening on Saturday, February 20th. Denise Sheat delivered a prayer spoken in Maori, translated by Rosaline Brown. World War I names were read aloud from the Roll of Honour by Bruce Gill who is a descendent of the McLachlan family (who has at least one family member recorded on the roll). World War II names were read out by Kevin Taylor who represented the Ellesmere RSA and the Doyleston Community. John Lay, Chairman of the Ellesmere RSA spoke of the disproportionate number of volunteers who left New Zealand to fight in both wars. He spoke particularly of 55 men and one woman (an Imperial Red Cross Nurse) who went to war and were from 29 families who lived over a six by two mile radius.

The two flags were lowered during the playing of the Last Post by trumpeter Leigh Walters and raised again to the sound of the Reveille. Flag bearers were Jacob Tod and Genevieve McCorkindale, descendants of the Tod and Maw families (also on the Roll of Honour). The sound of the trumpet was a stirring tribute and provided  fitting atmosphere to the occasion.

The new Lychgate now houses the plaques which were previously hanging in the Doyleston Memorial Library which was demolished as a result of damage caused in the 2010 earthquakes.

The section has been fully landscaped and six cherry trees planted for the six men who died during WWI, plus a Gallipoli Oak has also been planted.