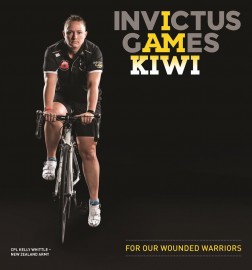 From Medic to Medal Winner

The Invictus Games provides an international stage that unites wounded, ill and injured Service men and women from around the world. The Games enable both active duty personnel and veterans to learn and share through their common experiences.

Corporal Whittle who tore hip cartilage whilst on deployment to Afghanistan, said she is proud to be part of the team this year.

“It is very humbling to be chosen to represent the NZDF for a second time.

“I am most looking forward to travelling with a larger team, meeting inspirational people from other countries, swapping stories and memorabilia with others, and representing the NZDF with one of my close friends,” she said.

Corporal Whittle said that the service men and women who compete at the Invictus Games prove that no matter what has happened to them in the past, it does not define who they are now.

“There are a number of people who have inspiring stories and don’t let their injury or illness hinder their day-to-day life. Each person has an individual story that can inspire someone else to better the life they have now.

“Recovery through sport can assist in building you back to the person you were before your injury and meeting others who have been or are in the same situation as you can inspire you to want more,” she said.

Corporal Whittle hopes to build on her medal haul this year following the double silver medals she won in the discus and shot put events at the London 2014 Invictus Games.

The Invictus Games will take place at the ESPN Wide World of Sports Complex in Orlando, Florida between May 8th and 12th, 2016.

The NZDF Invictus Games team is proudly supported by a number of Auckland and Christchurch businesses and RSAs.