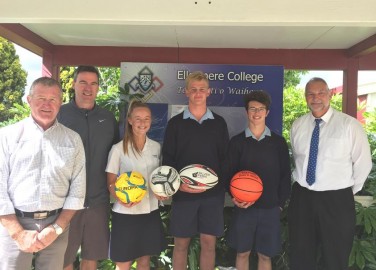 Southfuels is a New Zealand Bulk Fuel supplier, whose unique Fuel for Schools programme, is a simple and easy way in which locals are able to give back to schools in their communities. Southfuels have already distributed $700,000 to schools throughout New Zealand in the last eight years, and it doesn’t show any signs of slowing down.

Over the last few weeks five local schools each received a $1,000 Sports or Technology package all thanks to this programme.  Springfield and Windwhistle Schools opted for new Chromebooks for their classrooms, while, Ellesmere College, Sheffield and Springfield Schools all added to their sports’ equipment with either Hockey or Basketball Gear. One even added a Ki O Rahi Set (Traditional Māori Game) which the students were thrilled about.

This was all made possible thanks to the Schools’ local communities who purchase their bulk fuel from Southfuels and opt to be part of the Fuel for Schools. The programme is very simple; for every 100 litres of bulk fuel that is delivered by Southfuels, 50 cents is given back to the customer’s nominated school. The balance accrues and once it reaches $1,000 the schools can redeem their reward from the over forty packages on offer.

Fuel for School Coordinator, Alanna Taylor said, “the programme was developed as a way for us to support and give back, to the predominantly rural communities in which we operate. We couldn’t reward so many without the wonderful support from those supporting us. On average we are presenting thirty packages nationwide every three months and the joy and appreciation received from both the students and teachers when presented, brings a real sense of pride to us all.”