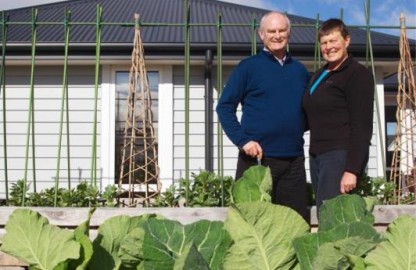 Garden of Love is a Winner!

Helen was one of five finalists in the competition and she is delighted to have triumphed over some tough competition, “When we saw the other nominees I thought they were really strong and it’s such an honour to win,” Helen said.

Helen was nominated by her husband, Brian Coker who lost both legs in the February earthquake after being crushed under the PGG building in Christchurch. Brian wrote in to nominate his wife for the prestigious competition to show appreciation for her tireless efforts in the creation of their dream garden at their new home in West Melton. The couple relocated from their Christchurch home as it was no longer suitable for easy wheelchair access. Helen gave up her career as a nurse to support Brian through his rehabilitation, and now volunteers as a clerk at the Canterbury Charity Hospital.

She added that she spends two or three days a week in the garden and Brian is fully involved too, in charge of the vegetable garden and propagating seedlings in the hothouse. The Coker’s had always enjoyed tending to a garden together and the new layout features flat paths, level entry access and low walls Brian can sit on. Hard work in the grounds continues as the couple realise their vision to  establish an English woodland-style garden, using many of their favourite shrubs and trees.

As a huge thank-you to all those who voted, the Cokers will open their garden at 211 Halkett Road, West Melton to the public from 1-4pm on Sunday December 20th. Entry by donation with all proceeds going towards the Canterbury Charity Hospital.