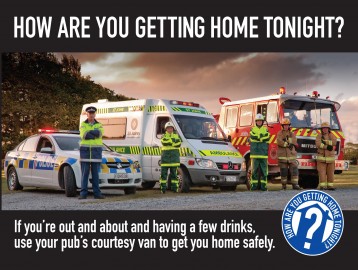 IF YOU DRINK, PLEASE CHOOSE NOT TO DRIVE!

Selwyn District Council, the New Zealand Police and Licensed premises across the district are once again participating in a Christmas/New Year drink drive campaign encouraging drivers to plan a safe ride home if they have had a few drinks.

Many people believe drivers who have been drinking have a lower chance of being stopped by police when they drive on rural back roads, but this is not the case. Canterbury Police will be carrying out more random patrols on all Selwyn roads over the Christmas/New Year holiday season. The booze bus will be deployed in both rural and urban areas.

“Drink driving is no longer acceptable as it puts everyone at risk of being injured or killed in a road crash that could have been completely avoidable,” said Selwyn Road Safety Coordinator Ngaire Tinning.

In Selwyn district from 2011 to 2015, there were 151 crashes where alcohol was involved. These crashes resulted in twelve fatalities, thirty four serious injuries and fifty eight minor injuries.

“In many cases when drivers are affected by alcohol, inappropriate speed and failure to wear a safety belt also contribute to the severity of the crash. Not surprisingly, most of these types of crashes occur between Friday evening and Sunday morning,” Ngaire added.

This year’s campaign encourages drivers who drink, to choose not to drive, but to think about having a sober driver, using the courtesy van and sharing the designated driver duties.  It also focusses on looking out for friends by discouraging mates from driving after they’ve been drinking and encouraging them to sleep over so they can avoid driving when drunk.

As part of the campaign, posters, coasters, bar mats and pens will be given out to hotels, taverns and other licensed premises in Selwyn in late November and early December.

“Police will be active in Selwyn operating check points and policing the roads in an effort to ensure that everyone is safe,” commented Senior Sergeant Pete Stills of the New Zealand Police. “Police encourage motorists to plan to have a sober driver and if utilising licensed premises in Selwyn to make use of the courtesy vehicles available.”

“Our local hotels and taverns already do a great job with host responsibility, with almost all having courtesy vans,” Ngaire said. “Each year as part of our road safety campaign, we distribute free resources to licensed premises to encourage and support their host responsibility activities.

“A large number of our sports’ clubs and local businesses have also taken up the opportunity to assist with the promotion of the campaign safety messages to their members and staff.

“We are very pleased we are able to continue to provide these free resources to local venues and truly appreciate the support they give us each year in sharing this important message,” Ngaire concluded.