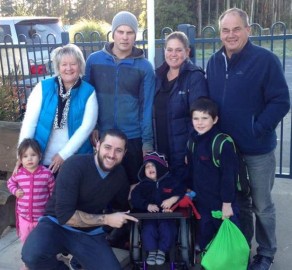 The Smolenski family live locally at Weedons and this is about their son Jonty. Dad and Mum, Sam and Maree Smolenski (and many will know Maree’s mother and father Julia and Lee Golding from their time in the district), older brother Lachlan and younger sister Ruby have all been involved in Jonty’s journey and they are now calling for support to enable them to give to those who have been there for them on this journey. Jonty, who has just started as a new entrant at Weedons School is the reason for the forthcoming ‘Jonty’s Journey Appreciation Race-night’ to be held at Addington Raceway on July 21st. Full details of this event are on the Jonty’s Journey Facebook page and the family would be very appreciative of any support.

“The race-night is an opportunity to raise funds for, and publicly thank, a number of charities that have been instrumental in supporting Jonty and our family over the past five years,” Maree explained. “The following is a short summary of Jonty’s life so far:

“Jonty is our second son, born seven weeks early, in May 2012. At the time of his birth, we began the biggest journey of our lives. Initially it was thought that he just needed time to catch up from his low birthweight, but when he began severely refluxing and refusing to feed we faced our first surgery to tighten the top of his stomach. We eventually left the neonatal unit in Christchurch after a long 96 days. When home, Jonty’s feeding deteriorated again and three weeks later we were back to the children’s ward, having the surgery repeated and a feeding tube placed, so we could feed him directly to his stomach. At the same time, Jonty’s vision and hearing was being tested as he appeared to present with deficiencies in these areas too. Since then, he has had numerous general anaesthetics and admissions to hospital. These include having the lenses removed from both his eyes, laser surgery, and synthetic lenses put in; grommets for his ears; colonoscopies and laparoscopies to review his gut issues; and a few viral illnesses which he takes longer to recover from, and with more interventions, than most other children.

At the beginning of 2015 we approached our genetics team again and instigated a review of Jonty, as we felt that, even despite his many setbacks, he wasn’t progressing as well as we had expected. Jonty’s paediatric team echoed our concerns and further testing was undertaken. After many months (including a five week admission with winter illness) we were delivered the news that Jonty suffers from a very rare genetic condition called Trichothiodystrophy (TTD).

We believe that Jonty is currently the only one with this condition, in New Zealand. Following this diagnosis we joined a Facebook support group which led to us being invited to attend the 2016 conference in Washington DC. We held a very successful fundraising dinner in April 2016 that allowed us to travel to the conference and currently have enough funds left in Jonty’s trust account for us to return again for the 2017 conference, next month.

Over Jonty’s five years of life we have met people and been involved in many organisations that have supported us. We wish to pay public thanks to a number of these and were presented with the possibility from Addington Raceway of holding an appreciation race-night to do so. One hundred percent of the funds raised will be shared between The Maia foundation, CCS Christchurch, Riding for the disabled Christchurch, Smiledial, Van Asch Deaf education centre and BLENNZ (Blind and Low Vision Education Network). We are currently seeking assistance from businesses who could offer  gratefully received goods or services, as either spot prizes or silent auctions on the night.”

Check out Jonty’s Journey on Facebook for further details.