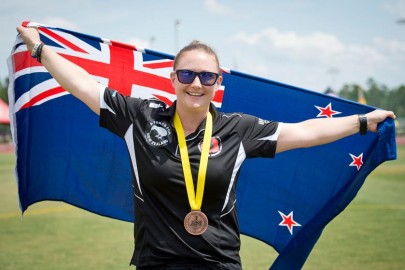 CPL Whittle, who won silver for the same event in the 2014 Games, faced an even tougher field during the 2016 competition.

“The other competitors were much stronger this year, they came out and smashed it!”

“It’s not quite the colour I wanted, but it’s all about participating – I’m stoked with the success,” Kelly said.

The Canterbury local, who has served for more than thirteen years in the New Zealand Army, was cheered on by family and friends as she took the podium.

Michelle Leonard, Kelly’s mother, who was first to greet her following her success, said, “I am so proud of Kelly. To me, it doesn’t matter what colour the medal is, it’s about seeing her do her best, even through her recovery.”

The Invictus Games provides an international stage that unites wounded, ill and injured servicemen and women from around the world. The Games enable both active duty personnel and veterans to learn and share through their common experiences.

Kelly injured her hip while helping a wounded Afghan local in Baghak, Afghanistan, and later injured her shoulder in a fall. She credits the Invictus Games as an important part of her personal journey.

“Mentally, the Invictus Games has made a huge difference for me. Using sport as part of my recovery has had a massive impact, it gives me a goal – something to work towards,”  Kelly added.

Royal New Zealand Navy Chief Petty Officer (CPO) Amy Baynes also achieved some outstanding results, winning silver medals in both the women’s cycling time trials and the women’s criterium cycling. Amy is originally from Gore but is now also based at Burnham Military Camp. This success takes the Kiwi competitors’ medal haul to five at the time of print.