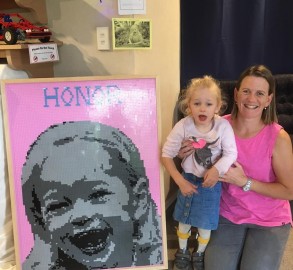 The annual Lego themed Christmas Grotto Fundraiser has recently come to an end after another successful year.

House of Bricks, founded in 2014 by Rachel de Vries, holds an event each year in Rolleston to raise funds for a person, family or cause in the Selwyn community.

This year they chose to raise funds that will go towards Honor Griffiths, a young West Melton girl with Cerebral Palsy. All the funds raised are going towards essential equipment she requires to make day to day living easier and more enjoyable.

The event, which ran from Wednesday, November 29th through to Saturday, December 2nd, took Rachel and husband Jason de Vries many hours of work. They were both kept busy coordinating the event as well as putting together the display. There were several thousand pieces of Lego used and over 200 hours were put in to the construction of the display pieces.

This year the Grotto had a range of different displays, including two chairs built with Lego that the children were able to sit on, there was a Technic creation, a Lego city street party scene and Mosaic art.

Children attending reported that they enjoyed poking around the display and seeing what different things they could spot.

950 people visited the Grotto during the week and $3000 was raised for Honor.