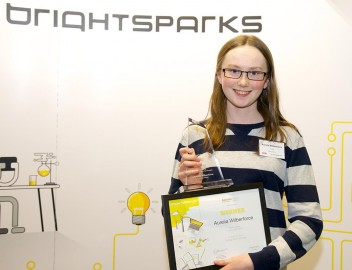 Aurelia Wilberforce, from Lincoln High School was the delighted winner of the Best Junior Concept category at the Bright Spark Awards, held in Auckland on October 29th.

Aurelia’s winning idea was called ‘Wakey Wakey’ and is a psycho alarm clock, unable to be silenced until it is sure the owner is fully awake!

Many can relate to an incident involving an alarm clock blunder; not hearing an alarm, or hearing it and hitting snooze, or even just turning it off altogether – only to fall back to sleep and wake an hour later in a panic. All these scenarios can lead to a person being at work or school and still feeling half asleep, as well as late! This is what inspired Aurelia to create her award winning app.

“I created it because one day I was running late for school, had a math’s test first up and felt half asleep, so I was thinking about how I could fix this and create something to wake me up properly and more efficiently. I decided to create something which had a horrible sound that would actually wake you up as I quite often find myself sleeping through normal alarms. An approaching science fair prompted me to actually create the concept and when a teacher informed me about the Bright Sparks competition it was a chance to enter it as well. I did all the programming myself.” explained Aurelia.

Her alarm is one that cannot be ignored! It features the ten most annoying sounds in the world, according to science, polls and Aurelia’s ear, and it cannot be turned off until the owner has completed a task designed to involve all parts of the brain, making sure that the owner is fully awake before being able to shut down the alarm.

Although the  project has been a huge success for Aurelia, It has not been allplain sailing though. She has struggled through varying methods and protocols, coding, crashing and dyslexia made the task more challenging too, “I struggle with reading, because I’m dyslexic, which means very scientifically written info is near impossible to read and understand. I eventually got around this by creating flowcharts which planned exactly how I would do it .”

Aurelia was delighted to receive recognition for her creation at the Bright Sparks awards. Celebrating its fifteenth anniversary, the Bright Sparks competition was launched to encourage and connect students with an interest in technology, who will be the nation’s future engineers, electricians and programmers.

Entrants walked away with a combined prize pool worth $10,000 and unrivalled exposure in the technology industry.