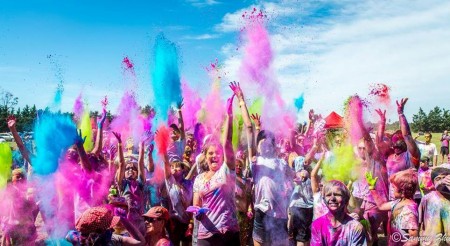 On Sunday, February 18th, the air in and around Helpet Park, Rolleston was filled with shrieks of laughter and squeals of delight as around 850 participants took part in the Rolleston Colour Run.

The inaugural event, which was run and organised by Rolleston Lions, was aimed at families in the Selwyn area as enjoyable and affordable entertainment.

Event participants had the choice to walk or run the course, which had five colour stations and three obstacles.

As well as the walk and the run keeping people busy, there were other activities available, one being a huge group piece of art work where participants could throw powder and coloured dye to create a masterpiece. Water pistols, sauce bottles and spray bottles were also used to create  various effects on the canvas. Organiser, Heather Kissell said, “this was an extremely popular activity and everyone had fun.”

Another hugely popular activity was the colour pit, where members of the public could buy powder to throw at friends. This was also supplemented by a large number of water balloons; which everyone enjoyed on the very hot day.

Other notable highlights were the Zumba demonstration with crowd participation and the countdown to a synchronised skywards, powder throw.

It was reported that this made a spectacular scene for onlookers, as well as making a wonderful rainbow mess!

The whole event would not have been possible without the fantastic support of much appreciated sponsors. Sponsors who got involved by hurling powder at participants as they passed through their sponsored colour stations.

“The event was a huge success,” Heather said, “largely due to our sponsors and the large number of volunteers who assisted,” she added. “Thanks also to all those who attended and made it the success it was,” Heather concluded.