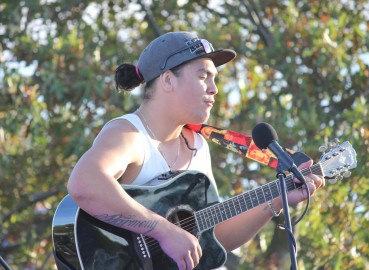 Music on the Green

On Saturday, March 19th Rolleston held their first ever Music on the Green session – and what a success it was! Around 3,500 have attended the various summer events held in Selwyn this year which have included a Teddy Bear’s Picnic, the World Buskers’ Festival Roadshow, pool parties, picnics, free concerts, skate jams and drive in movies. The sheer number of people attending these free community events is more than enough evidence to deem the initiative a huge success. The Music on the Green events were a series of free concerts that not only provided outstanding entertainment for the crowds attending, but also allowed local artists to promote their musical skills. Definitely proving that amazing talent does not have to be sought out internationally – but can be found right on one’s doorstep.

Selwyn Singer/songwriter, Cingston Brown performed at the Rolleston venue to acclaimed reviews from those attending. Cingston has been writing his own material since the age of twelve and is a prime example of undiscovered talent in the area. Also performing on the day were local band Reconstruction and pop-rock artist Mari Slack, along with Alex Hardy, a seventeen year old musician who won the Lincoln High School musical festival. Alex was also part of New Zealand’s Got Talent and the X factor.

This was the last of the Summer in Selwyn events but due to their obvious popularity, there will hopefully be more to look forward to next summer.